Ireland looked to put their off-field problems behind them as they faced Poland, and Martin O’Neill’s side will take heart from a well-earned 1-1 away draw in Wroclaw.

A friendly international that failed to ignite in a dour first half, finally came to life in the 54th minute when Aiden O’Brien headed home a debut international goal to put Ireland ahead.

The goal sparked the home side into life and they were eventually rewarded with an equalising goal three minutes from time as substitute Mateusz Klich slotted the ball home to ensure the sides ended honours even.

In a slow start to the game in Poland, Ireland looked a lot more organised, compared to last week’s Nations League thumping by Wales, sitting behind the ball with Shaun Williams marshalling the midfield in front of the defence.

Poland were far from anxious to get things going, perhaps still feeling the effects of their impressive outing in Italy last Friday, where they drew 1-1 in their Nations League clash.

Ireland, to their credit, were trying to take a positive approach with wing-backs Enda Stevens and Cyrus Christie pushed forward on their respective flanks, while Callum O’Dowda and Jeff Hendrick were both dropping into space looking to pick up the ball from the back three.

In fact, the hosts almost gifted Ireland two opportunities to get in on goal inside the opening six minutes thanks to some lackadaisical passing between defenders and keeper. The Irish numbers were not on hand to capitalise. 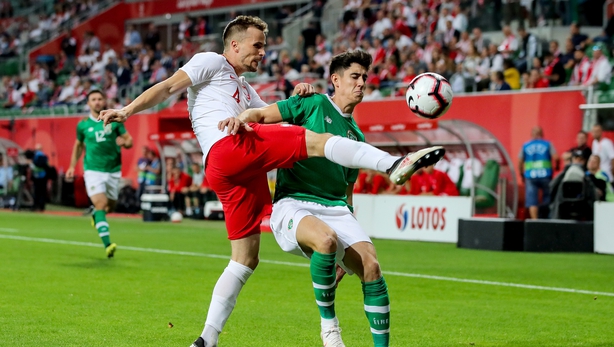 But the game almost, and really should have, burst into life in the 10th minute when Poland were gifted a golden opportunity from a set-piece.

Neither a free, nor a corner, but rather a Rory Delap-style long throw from the left wing.

Marcin Kaminski rose highest to flick the ball on, and with the Ireland defence all drawn towards the dropping ball, Arkadiusz Milik was left unmarked at the back post with just the keeper to beat. It looked easier to score but somehow the Napoli man contrived to head the ball back across goal and wide of the post.

Ireland maintained their forward momentum in what was still a very slow-paced encounter and managed to win two quick corners, however, O’Dowda’s delivery lacked quality and Poland easily cleared.

The next ten minutes, or so, showed exactly why UEFA took the initiative to create the Nations League in an attempt to move away from meaningless friendly fixtures, as both sides kept the pace pedestrian with neither looking to take unnecessary chances.

A set-piece in the 27th minute gave Poland a slight chance to open the scoring, however, Grzegorz Krychowiak was unable to divert a Kaminski half-shot home, following a corner delivered to the edge of the box.

Two minutes later, O’Brien had a chance to mark his international debut with a goal, but his snap-shot was from a tight angle and the ball flew wide at the near post.

But the opportunities were few and far between with a Jeff Hendrick surge into the box and a Milik long-range effort easily dealt with by Darren Randolph the only attacking play of note as half-time approached.

Poland did push on in an attempt to take something into the break, however, some decent last-ditch defending from John Egan prevented any threat that was building on the Ireland goal.

Scoreless at the break. A good 45 minutes on paper for an Ireland team in turmoil both on and off the pitch. But the game never got going. The second stanza awaited. 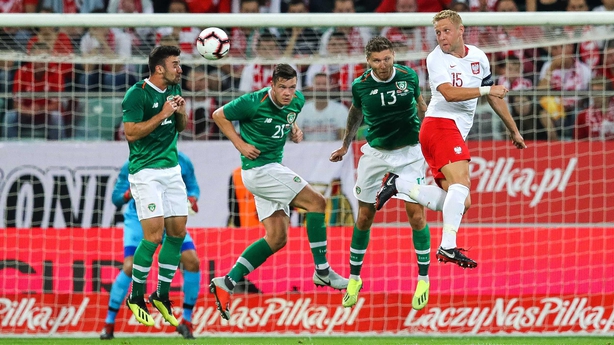 Another laborious start to the second period, but eight minutes in, Cyrus Christie picked up the ball on the right flank and ran through four retreating white jerseys.

The Fulham man was stopped just as he was about to unleash an effort on goal, but the resulting corner would lead to the opening goal of the game.

The initial effort coming to nothing, Ireland picked the ball up on the edge of the box and worked it into the right corner as Hendrick rolled it through to the still advanced Richard Keogh.

The captain clipped the ball back to the arriving O’Dowda, whose first touch was sublime with the inside of his right foot to take the ball inside the arriving defender, creating the space to cross into the box. 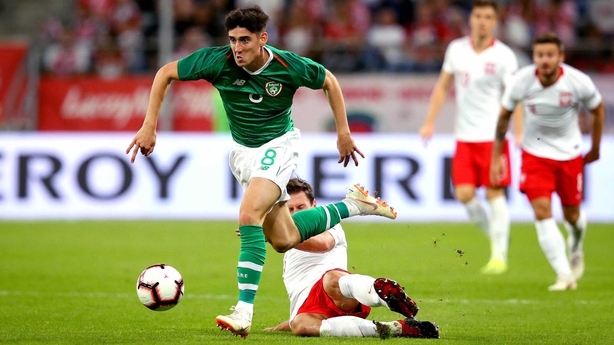 Poland were forced to pick up the pace and the goal injected some real activity into the game. Worryingly, Ireland began to sit deep, and were getting deeper as Poland pushed forward.

But Ireland continued in their endeavours to push forward, and with this Polish side looking fragile under pressure, another chance presented itself in the 59th minute as O’Dowda ran onto the ball in space, thirty yards from goal.

This time the Bristol City man decided to go it alone and unleashed a ferocious effort goalwards, however, the shot was always rising and would not threaten Wojciech Szczesny’s goal.

Poland still lacked belief but were starting to push Ireland back, once again, and suddenly the home side started to create chances.

The first for half-time substitute Damian Kadzior who forced Randolph to make a smart save, before Karol Linetty’s effort was blocked en route to goal by a green jersey.

The spate of substitutions another reminder of the benefits of the inaugural Nations League, with the game unable to maintain its momentum.

Inside the last ten minutes, Ireland were getting closer to a morale-boosting away victory, limiting the home side to shots from distance – Klich’s 85th-minute effort sailing high over the bar.

But, with a name that headlines writers dream about, the Leeds United man clicked two minutes later following a great give and go with Milik, before caressing the ball beyond the reach of Randolph and into the corner of the net.

Poland pushed for a winner in injury time, but in the end, Ireland held on to take something from the game, perhaps providing a glimmer of light at the end of this dark international tunnel that  O’Neill’s side are looking to escape from.