Wales boss Ryan Giggs claimed that "not many teams could have lived with us tonight" after his players crushed Nations League opponents the Republic of Ireland.

Tom Lawrence, Gareth Bale - with his 30th goal for Wales - Aaron Ramsey and Connor Roberts were on target before Republic substitute Shaun Williams provided some cheer for the visitors in a 4-1 defeat at Cardiff City Stadium.

The victory might not have erased the pain of Wales' World Cup elimination last October when the Republic won 1-0 at the same venue.

But the manner of the performance, with talented youngsters Ethan Ampadu and David Brooks excelling on their first competitive starts and Bale at his brilliant best, gave a tantalising glimpse of the bright future that could lie ahead under Giggs.

"I talked about expressing themselves and trusting each other, and that's what I got," Giggs said.

"We could have scored more, but to get four in any game is special.

"Credit to ourselves, not many teams could have lived with us tonight. I think we'd have given anyone a game.

"The young lads came in and did well, but I feel we have got 30 players who can be in the first XI. I never had that when I played for Wales."

Asked about 17-year-old Ampadu's display, Giggs added: "Ethan is a talent, but not only as a player, but as a person. He is so measured and mature and takes it all in his stride. I am really pleased for him."

Ireland suffered a 4-1 defeat in their opening UEFA Nations League game against Wales, @sportsdes hears from Martin O'Neill plus the rest of the morning's sports news pic.twitter.com/NfeYuL0eOR

And Giggs also enthused about a trademark box office display from Bale ahead of what is now likely to be an appointment with a full-strength Denmark in Aarhus on Sunday after a dispute about players' commercial rights was resolved.

"Every time he plays, he makes a difference, whether it's for Wales or Real Madrid," Giggs said. "It gives everyone a lift, but he's a great example of the level you have to get to.

"It's a difficult match with a very good team on Sunday. We don't know what their preparation has been like, but we expect a tough game, their best 11, and they are probably favourites in the group.

"We might have to play even better to get that result. I said to the players the bad news is you have to keep to that standard. They have to keep getting better, keep improving." 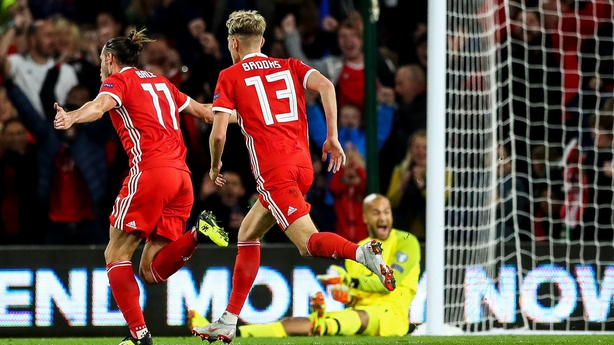 Ireland boss Martin O'Neill had no complaints about the result after seeing a team missing a handful of regulars taken apart.

"We were well beaten in the game," he said. "We were second best for pretty well all of the evening.

"We made more than a few mistakes. We allowed room for world-class players, and particularly Gareth Bale, to work his magic.

"We were missing some really key players tonight. Fine. This was a really tough evening for us, regardless of whether we had some players missing, and we should do better.

"It has not diminished my enthusiasm for the job one jot. We've a long, long way to go, and we might have one or two players back for the games in Dublin."