Ireland were taught a footballing lesson in their opening Nations League encounter, as Wales romped to a 4-1 victory at the Cardiff City Stadium.

The game was effectively finished as a contest inside the opening 37 minutes as Ryan Giggs’ side looked a class apart, scoring three times thanks to strikes from Tom Lawrence, Gareth Bale and Aaron Ramsey.

Defender Connor Roberts added the fourth early in the second half, and while substitute Shaun Williams gave Ireland a glimmer of hope in the 66th minute, as he scored his first goal for his country, it proved nothing more than a consolation with Wales easing down through the gears in the final stages.

Returning to the scene of the recent World Cup qualifying victory, Ireland began with an element of intent and Callum Robinson, making his Ireland debut, looked lively starting in a central role, behind front man Jonathan Walters.

But while Ireland attempted to push on, it was the home side who showed the early quality and composure with Chelsea youngster Ethan Ampadu immediately impressing in his holding midfield role.

And when that relentless Welsh passing game really got going they were immediately rewarded with a sixth-minute opening goal, and deservedly so.

Ampadu, Roberts, David Brooks and Joe Allen were all involved as they played their way through the retreating Irish, leaving Stoke’s Allen in acres of space in the middle of the park.

The midfielder had time to spot the run of Lawrence before sliding the perfect pass behind the disjointed Irish back four.

Clark was caught ball watching and was never in position to deal with the Welsh attacker, giving the Derby County man way too much space to smash the ball past Darren Randolph at the near post.

The keeper may have been better positioned but the strike was emphatic. 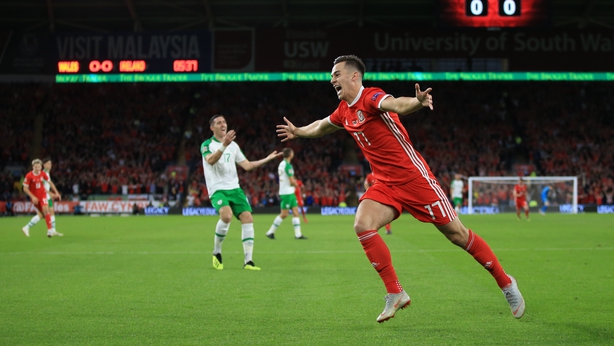 Ireland were all over the place, the home side buoyed by the early strike and their new-look side was oozing confidence.

Callum O’Dowda had a deflected effort easily stopped after 14 minutes, but it was comfortable for the keeper and that was as good as it got for Ireland early on.

The Wales front three were causing serious problems with their constant interchanging of position, giving the Irish defence endless headaches.

And the home side were two up after 18 minutes as Wales capitalised on some sloppy Irish passing going forward.

Out of nothing, Ben Davies spotted space in behind the Irish defence and drilled a 60-yard, inch-perfect diagonal ball perfectly into the path of talisman Bale.

The Real Madrid man was criminally allowed to cut inside Clark and onto his lethal left foot, and once Bale had room to shoot, the outcome was inevitable, as he smashed the ball out of reach of the diving Randolph and into the top corner. 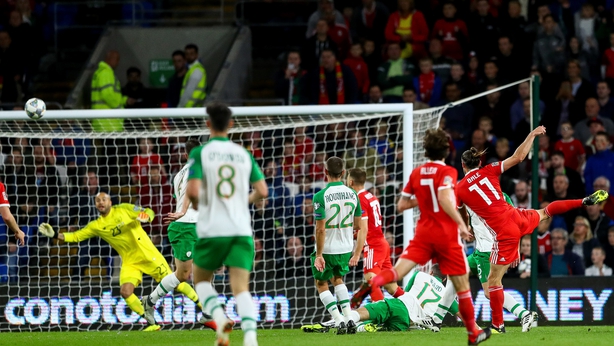 Set-pieces looked the only route to goal for Ireland, as there was very little composure on the ball, but when they did finally win a corner, the cross into the box was easily dealt with by the towering Wayne Hennessey.

Robinson, eager to impress on his Irish debut, remained lively and made some room at times, now operating on the right side of attack, before clipping a great ball into the box. This time a foul in the area handed Wales a free out.

But it was one-way traffic and the home side could have gone further ahead just after the half-hour mark as Allen, Brooks and Lawrence linked up, once again, before the opening goalscorer’s shot from just outside the box was parried clear – a near-perfect counter-attacking move, where a third goal would have called time on this contest.

Yet still Ireland could hardly hold onto the ball as Wales kept them floundering inside their own half.

Three minutes later, the third goal could, and possibly should, have sealed it, as more precise and perfect passing had Ireland chasing shadows with Wales working the ball from the right flank over to the left.

A whipped ball into the box was met by defender Roberts, who somehow found himself at the other end of the pitch, and his powerful header, on the run, flew just over the bar.

Ireland’s best chance of the half arrived in the 36th minute. A neat one-two down the right allowed Seamus Coleman to pull the ball back for the arriving Robinson, but he side-footed it over the bar when he had to hit the target, at least.

The game was over as a contest in the 37th minute as Jonathan Walters was dispossessed in midfield. Seconds later, Randolph was picking the ball out of the net for the third time.

Quick and crisp, Wales youngster Ampadu drilled a fine pass to Ramsey, and the Arsenal man smashed it home, low to Randolph’s left – again, the keeper beaten at his near post.

The first-half horror show was finally called to a close as Ireland went into the break expecting the wrath of Martin O’Neill and Roy Keane to be waiting in the dressing room.

But was it the players or the tactics that were too blame?

The forensics would have to wait on that one as the second half started. Yet Ireland still looked shell-shocked as the second period began, sitting deep, unable to string more than a couple of passes together without losing possession.

An early corner was the best they could muster, with Shane Duffy’s header easily dealt with.

Wales continued to do what they showcased in the first half, albeit at a slightly less frenetic pace, while there was a party atmosphere around the arena, last year’s defeat now a distant and irrelevant memory.

Robinson was Ireland’s best outlet, playing in a more advanced role, but a couple of moments inside the Wales box could not lead to chances on goal.

The fourth goal of the game did arrive in the 55th minute, but yet again, it was the home fans celebrating as defender Roberts found himself high up the pitch, once again, and this time he was rewarded for his endeavours.

Ireland defending on the edge of their penalty area, yet standing off the advancing Wales players, as Lawrence and Bale worked the ball into the box, before the latter smashed a delightful pass at pace across the edge to the awaiting Roberts.

One touch to control and another to volley past the Irish keeper as the game descended into farce from Ireland’s point of view. 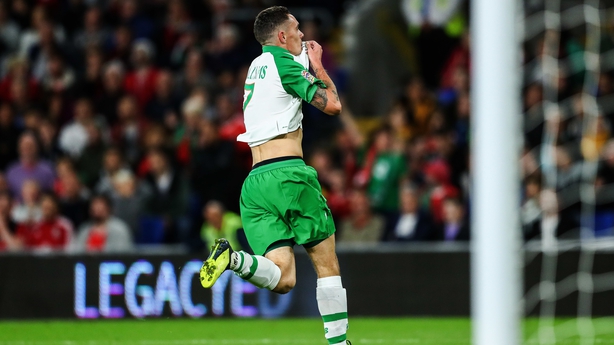 Out of the blue, Ireland pulled one back, as substitute Shaun Williams caught Ramsey in possession deep inside his own half in the 66th minute, before the Millwall man broke into the box and clipped a delightful ball over the advancing Hennessey.

A mere blot on the copybook, however, as Wales regained control of the game despite a few minutes of decent Irish attacking play, and O’Neill’s side were handed an element of respite as Real Madrid man Bale was withdrawn, leaving to a standing ovation. Job done.

Tyler Roberts, only on the pitch for Bale, almost added a fifth in the 78th minute, forcing Randolph into a decent save down low to his right, while Brooks should have scored another in the closing stages, but for a last-ditch tackle from substitute Enda Stevens preventing any further embarrassment for the Irish.

But it was a night to forget for Ireland who somehow have to quickly bounce back from this humiliating night in the Welsh capital before the Dublin double-header against Denmark and the return fixture with Wales next month.