Nemanja Matic believes Manchester United are back in the title hunt after a win masterminded by Jose Mourinho - a manager he says has been unperturbed by mounting pressure and remains one of the world's best.

United could ill afford the pressure to ratchet up any higher heading into the international break after chastening back-to-back defeats against Brighton and Tottenham.

But Matic knows there is a method to such bombast, helping to take the pressure away from his players ahead of a trip to Burnley that they won 2-0 on Sunday.

"He was very confident before the game he prepared the game in a very good way," the defensive midfielder said.

"We knew where they could cause us problems with the long balls, that is why (Marouane) Fellaini played close to our defence, to stop the long balls and I think this performance shows that how we need to play football and we still can compete for the title.

"Of course, he knows what he is doing (in press conferences) for sure. You probably know that also. It's good for us also.

"He is one of the best managers in the world, you know what he won in his career so that shows you everything." 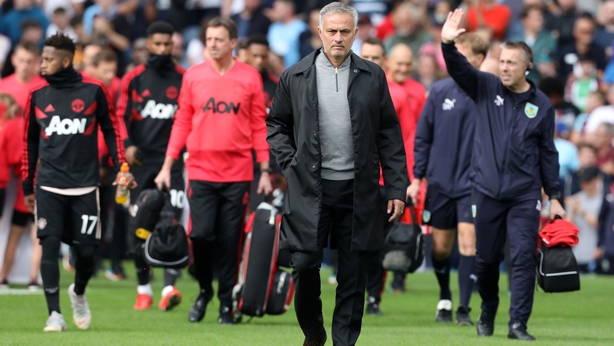 But things have gone awry at Old Trafford of late - not that Matic, a Premier League winner under the Portuguese at Chelsea, has not seen any difference in Mourinho's persona this season.

"No, no," the United midfielder said. "I think he is dealing very well with the pressure. "That is why he is here in Manchester United. I don't see any difference."

The win at Burnley means United sit on six points after four games - and a further six behind Liverpool, Chelsea and surprise package Watford.

Asked whether United can afford any further slip-ups considering the gap, Matic said: "Of course, but they (United's rivals) also have to win all games, and I think that's impossible.

"Someone needs to lose to drop the points and it's still too early to say something.

"We have to start to win the games and I think we played well, like we played first half against Spurs, I think we did well.

Fellow United midfielder Marouane Fellaini added: "We have the quality (to win the title), that's for sure. We have to stick together and play like we did last week in the first half.

"OK, the second half was bad but we have to keep this spirit and think about every game and be positive. I think when we play positive football we do well.

"The spirit was great. Everybody wanted to win. The challenges, the 50-50 balls, everyone wanted to win them, the second balls, too. The spirit is there."

Fellaini was one of three changes at Burnley and Mourinho said the imposing midfielder played a "fundamental" role.

"I know what I have to do," the Belgian added. "I have certain experience, 10 years in the Premier League.
"When he gives me a chance I try to give everything. The whole team played well today and that's the most important thing."