Lionel Messi and Luis Suarez both scored twice as Barcelona moved top of La Liga after routing Huesca 8-2 at the Nou Camp.

Ernesto Valverde's side followed up previous league wins over Alaves and Valladolid with a resounding victory to extend their 100 per cent record this season and knock Real Madrid off top spot on goal difference.

Huesca made a dream start and although they trailed 3-2 at the interval they opened the scoring through Watford loanee Cucho Hernandez and made a real fight of the first half before Barca ran amok in the second period.

After Huesca's shock lead, Messi, Jorge Pulido's own goal and Suarez put Barca 3-1 up, but the visitors hit back again through Alex Gallar.

In the second half however, the floodgates opened. Ousmane Dembele, whose curling shot had earlier hit the crossbar, and Ivan Rakitic struck quick-fire goals to put Barcelona firmly in control. 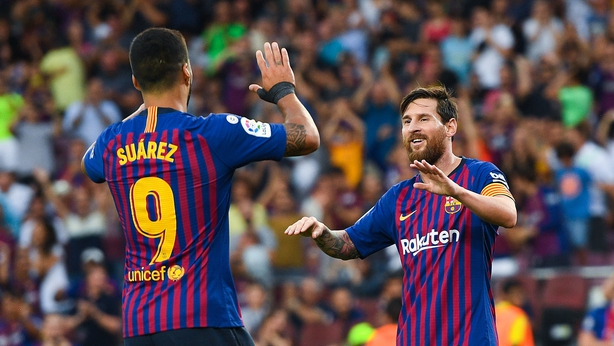 Messi, who also struck the woodwork in the second period, notched his second, Jordi Alba added a seventh and Suarez completed the scoring from the penalty spot in stoppage time.

Pulido turned Alba's low cross into his own net in the 24th minute and Suarez made it 3-1, with his first of the night awarded after the video assistant referee (VAR) showed Alba was onside when he supplied the cross.

Huesca battled back when Gallar converted Moi Gomez's cut-back three minutes before the break and the minnows left the field with a spring in their step at the interval.

Messi's shot early in the second half hit Huesca goalkeeper Axel Werner and then the crossbar, but Barca regained a two-goal lead through Dembele's low angled finish in the 48th minute. 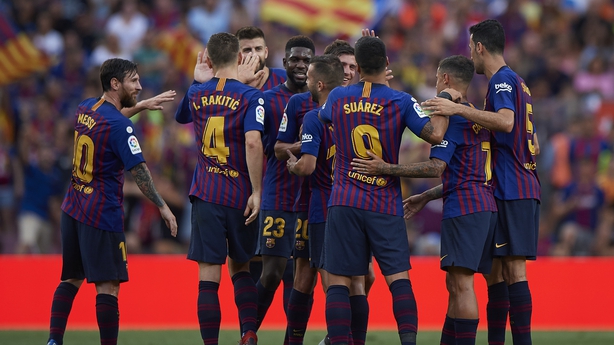 Rakitic crashed home Messi's ball over the top in the 52nd minute and the latter slid home his second after racing on to Philippe Coutinho's pass nine minutes later.

Messi then provided a defence-splitting pass for Alba to fire home the seventh goal and after Suarez had been felled by Werner in added time, he picked himself up to tuck home the final goal from the penalty spot.

Suarez had offered the spot-kick to Messi who was on his hat-trick, but he declined and the Uruguayan duly obliged.