England manager Gareth Southgate has revealed that Declan Rice has yet to make up his mind on his international future.

Rice was not named in Martin O’Neill’s Republic of Ireland squad for the upcoming UEFA Nations League game against Wales and the friendly with Poland amid doubts over his international future.

The 19-year-old has played with Ireland throughout the underage set-up and has been handed three senior caps, although crucially they all came in friendlies meaning he can still switch to England, the country of his birth.

Southgate is understood to have held talks with Rice in regards to switching from Ireland to England and there were fears that the West Ham midfielder may have already come to a decision.

However, speaking at a press conference to name his squad for games with Spain and Switzerland, Southgate revealed that it may not be as cut and dry as believed.

"There are so many dual nationality players, he is a good young player," the England manager said. "He has a really difficult decision because there is a lot of pressure on him. 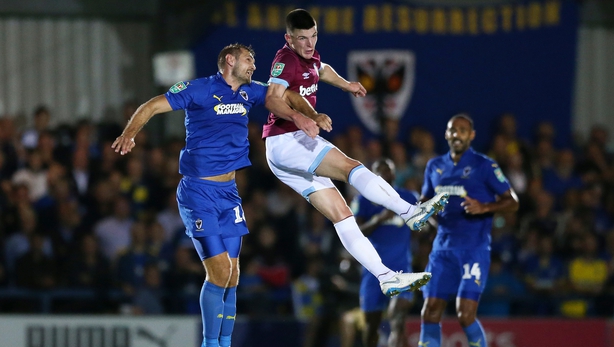 "I’m conscious that he’s a very young man and there’s a lot of spotlight on him. As far as I’m concerned he’s with Ireland at the moment and as much as we think he’s a very good player, that decision has to lie with him."

While Rice will not be part of the English squad for their next two games there will be at least one new face.

Shaw has not played for his country since a 1-0 defeat to Germany in 2017 but has returned at the expense of Old Trafford team-mate Ashley Young in their first squad since the World Cup.

Southampton goalkeeper McCarthy has also earned a first call-up with Joe Gomez and James Tarkowski also returning for the Nations League game at Wembley against Spain on September 8 and friendly in Leicester with Switzerland three days later.

Southgate has also given Adam Lallana a recall after the Liverpool midfielder was left out of the World Cup squad following an injury-plagued campaign.

Jamie Vardy and Gary Cahill have effectively retired from international football - although are available in case of an injury crisis.