England defender Maguire's drilled effort in stoppage time added insult to injury for Saints, who had Pierre-Emile Hojbjerg sent off for two bookings.

Ryan Bertrand's thunderbolt strike on his 150th appearance for the club had the hosts in front, only for Demarai Gray to equalise just four minutes later.

Hojbjerg's dismissal after diving in the Leicester box gifted the Foxes the chance to steal the points, and the visitors duly obliged - much to Puel's delight. 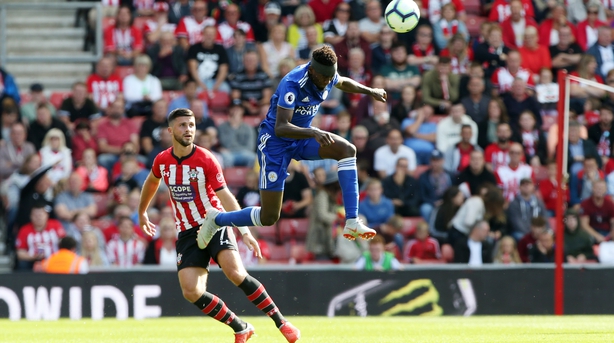 The ex-Nice boss was sacked in 2017 despite guiding Saints to an eight-place Premier League finish and the League Cup final.

Southampton's wait for their first win of the season goes on, with Mark Hughes' men now boasting just three victories in their last 28 Premier League games at St Mary's.

Ireland forward Shane Long (above) started and was substituted with in the 86th minute. 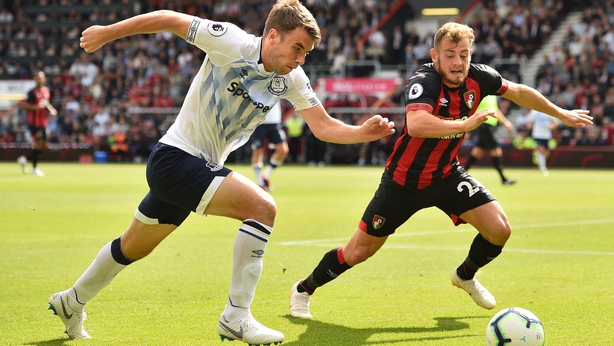 Bournemouth fought back from two goals down to earn a 2-2 draw with Everton in a dramatic match as both teams ended with 10 men but with their unbeaten records intact.

Everton, captained by Seamus Coleman (above), who recovered from the first-half sending-off of their new forward Richarlison, who aimed a head-butt at Adam Smith just before the break, to take a 56th-minute lead through Theo Walcott.

The home side, though, were also reduced to 10 on the hour when Smith was sent off for bringing down Walcott in full cry, and Michael Keane's header put the visitors two up.

But Bournemouth, looking for a third consecutive win this season, battled back with Josh King converting a 75th-minute penalty before Nathan Ake prodded home the equaliser four minutes later.

Keane had to be taken off on a stretcher after a late collision left him with what looked a serious injury and 13 minutes of stoppage-time failed to separate the teams. 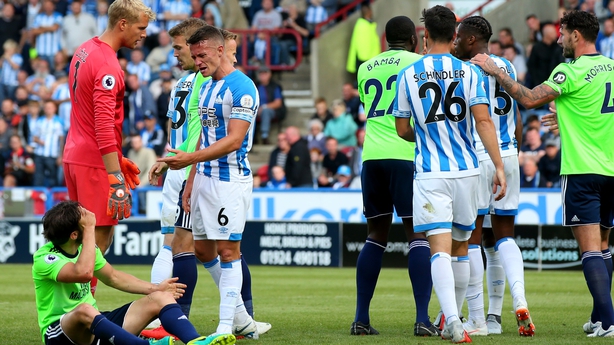 Jonathan Hogg was sent off following an ugly collision with Ireland's Harry Arter (above) as Huddersfield and Cardiff ground out a goalless draw that did little to advertise their Premier League pedigree.

Both sides are tipped as relegation candidates and if this was really the earliest imaginable 'six-pointer' of the season then taking one apiece suggests a long, hard campaign could be on the way for David Wagner and Neil Warnock.

Hogg saw red just after the hour, aggravated by Arter but responding boorishly - first pushing forward with his head then shoving the midfielder to the ground.

That gave Cardiff, for whom Greg Cunningham was an unused sub, time to press for a win which had never previously seemed likely, but they proved no more able than their hosts to summon a cutting edge worthy of the top flight.

"It was a game changer wasn't it," said Wagner of the sending off after banking a first point of the campaign.

"The incident with the red card was soft but, to make it totally clear, Hoggy has to solve the situation better. It was two aggressive players in this moment.

"One was much more clever than the other and unfortunately the clever one was not my player."