Stoke dropped into the bottom three of the Sky Bet Championship after being beaten 3-0 at home by Wigan and finishing with 10 men.

The Potters were among the pre-season favourites for a swift promotion back to the Premier League, but new boss Gary Rowett now remains without a win in four league games.

After Stoke saw an early effort from Benik Afobe ruled out for offside, Wigan went ahead after 27 minutes through Will Grigg.

Gavin Massey added a well-crafted second five minutes later to put the Latics, who were League One champions last season, in control before the break.

After 57 minutes, Northern Ireland forward Grigg got his second of the night from the penalty spot.

Stoke's miserable night was compounded with 12 minutes left when defender Ashley Williams was sent off for a second caution. 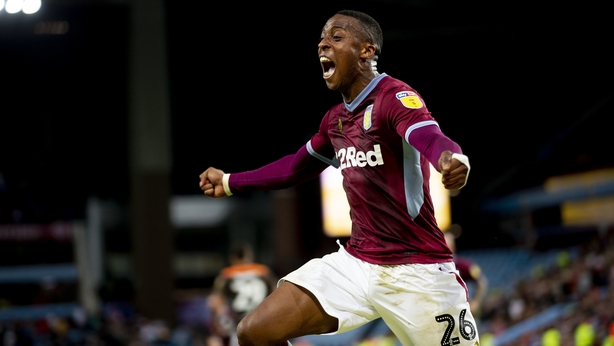 The Bees went ahead in the 23rd minute when Neal Maupay crashed in a half-volley for his fourth goal of the season.

Villa equalised six minutes before the break after Ivory Coast forward Kodjia had burst into the penalty area.

Brentford looked to have snatched all three points with just eight minutes left when Frenchman Maupay turned the ball in from close range.

However, after five minutes of added time was played, Kodjia headed in from close range to spark wild celebrations in the Holte End.

Bolton, who battled against relegation last season, beat Birmingham 1-0 at home to move up into third place, level on 10 points with Middlesbrough and leaders Leeds.

Midfielder Will Buckley looked to have got the final touch on a cross from fellow substitute Sammy Ameobi with 17 minutes left.

At the other end of the table, Reading picked up a first point of the season in a 2-2 draw at Blackburn, but blew a 2-0 lead.

Icelandic frontman Jon Dadi Bodvarsson put the Royals in front after 12 minutes and soon doubled the lead from close range.

Rovers, though, got themselves back in the match early in the second half when Charlie Mulgrew converted a penalty after 50 minutes.

After 77 minutes, Mulgrew completed the comeback with another spot-kick after he had been tripped.

Norwich scored twice in the closing 10 minutes to see off Preston 2-0 at Carrow Road and secure a first Championship win of the campaign.

Sheffield Wednesday also managed a first league victory of the season after beating Millwall 2-1 at Hillsborough.

Barry Bannan put the Owls in front after 16 minutes with a superb volley from the edge of the box.

Tom Lees made it 2-0 less than a minute into the second half when he knocked the ball in at the far post following a free-kick.

The Lions, though, set up a tense finish when midfielder Ryan Tunnicliffe reduced the deficit in the 72nd minute.