Leeds United midfielder Pablo Hernandez salvaged Marcelo Bielsa's unbeaten start to the season with an equaliser in the 2-2 draw against former club Swansea.

Ex-Elland Road academy player Oliver McBurney had looked like upsetting his old club with two goals either side of Kemar Roofe's fourth of the campaign.

However, Hernandez swept home 10 minutes from time and, although Leeds lost the Championship's only remaining 100% record, a point was enough to take them top of the table on goal difference from Middlesbrough.

At the other end of the table QPR extended their unwanted 100% record with a fourth successive defeat after losing 3-0 at home to Bristol City. 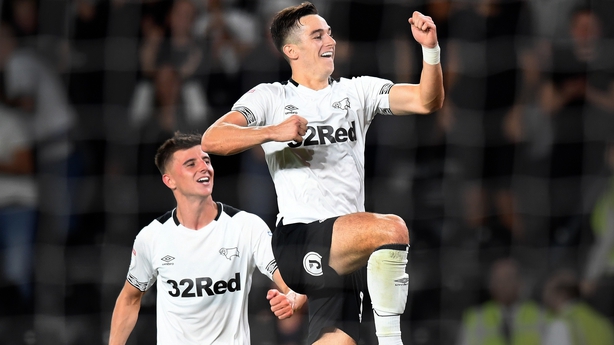 After back-to-back league defeats Derby returned to winning ways with a 2-0 victory over Ipswich.

Hull came from behind to win 3-2 and end Rotherham's best home run since April 2001.

Richard Wood's early header put the hosts ahead, but Australia international Jackson Irvine equalised on the counter-attack and, after Fraizer Campbell struck on the stroke of half-time, Irvine added his second just after the break.

Jamie Proctor pulled one back with 15 minutes remaining, but the hosts could not force an equaliser.

Republic of Ireland U21 international Ryan Manning made his home debut for Rotherham having moved on loan from QPR and was named man of the match.