Ronan Murray hit a brace as Dundalk returned to winning ways against Cobh Ramblers at Oriel Park to keep their hopes of a fourth successive FAI Cup final appearance alive.

Stephen Henderson’s side shocked Dundalk with a 1-0 win in Monday’s EA Sports Cup semi-final and they made the trip north hoping to pull off a second giant killing act in the space of a week.

However, the efforts of Murray - with a Jamie McGrath effort sandwiched in between - sealed Dundalk’s passage to round two and Stephen Kenny will be hoping that the recent Europa League exit to AEK Larnaca and the bitter experience in Cobh have been flushed from the system.

The Lilywhites boss recalled a host of his star players, making eight changes to the side that was beaten in St Colman’s Park, while he also handed a first start to striker Georgie Kelly - who scored against Cobh for UCD back in June.

Unsurprisingly, his opposite number made just one change with Chris Hull, scorer of the winner on Monday, missing out completely with illness. He was replaced by Jaze Kabia.

Dundalk’s intent was clear from the start with Michael Duffy’s fizzing half volley from a Sean Gannon cross brilliantly saved by Adam Mylod with just 90 seconds on the clock.

Cobh, however, didn’t appear to read the memo and Gary Rogers had to parry a Kabia effort just two minutes later after some indecision in the backline by Daniel Cleary.

The hosts were uncharacteristally poor on the ball during the early stages, leading to groans of frustration amongst the majority of the 2,214 supporters who arrived expecting a comfortable backlash. 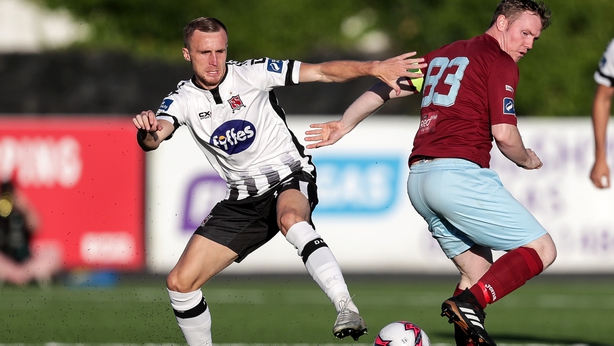 And they almost paid the price in the 11th minute when Ramblers skipper Shane O’Connor curled an effort agonisingly wide after Brian Gartland needlessly coughed up possession.

Kenny’s side improved slightly as the half wore on and both Murray and Kelly went close with decent attempts but with half an hour played, the Munster side looked extremely comfortable.

They were undone in controversial fashion two minutes later, though, as Murray tapped Dundalk ahead from what looked to be an offside position.

Robbie Benson's crafty ball to the left found Duffy and the winger’s vicious ball across the face of goal was turned home by the Mayoman from no more than three yards out with Henderson and his players furious to see the flag stay down.

Kelly went close to marking his full debut with a spectacular goal, smacking a volley just over the top five minutes before the break and the big striker showed a number of promising touches before his withdrawal late on.

The second-half started in much the same way as the first with Dundalk looking out of sorts on the ball but they gave themselves a two goal cushion in the 52nd minute when McGrath gave Adam Mylod the eyes to tuck home a Dean Jarvis cross.

Denzil Fernandes stung the palms of Rogers with a decent hit as Cobh tried to force a way back into it but Dundalk finished strongly and substitute Dylan Connolly should have made it 3-0 just seconds after coming on but he fired straight at Mylod.

Murray, however, did add a third with five minutes remaining when he tucked home a cross by the ever willing Sean Gannon to put the cap on the win.

Elsewhere, Bohemians had a facile 7-0 win away to Wexford Youths.

Bray went down 3-1 at home to Finn Harps after extra-time.

The Wicklow side led through Gerald Pender but Sam Todd’s goal brough the tie into overtime.

Michael Place and Jacob Borg scored to put the Ulster side into the second round.

Shelbourne were 4-0 winners over Athlone Town with a Nika Kalandarishvili own goal setting the Dublin side on their way before Patrick Kavanagh, Greg Moorhouse and Lorcan Fitzgerald scored second-half goals.