The Egypt international scored 11 goals to help Jurgen Klopp's side reach the final in Kiev, where he was forced off injured as they lost 3-1 to Real Madrid.

He is up for the award alongside Cristiano Ronaldo - who left Madrid for Juventus earlier in the summer - and Barcelona's Lionel Messi.

Manchester City were thrashed 5-1 on aggregate by Premier League rivals Liverpool at the quarter-final stage but that has not stopped Kevin De Bruyne being nominated in the best midfielders category.

The Belgium international joins Real Madrid pair Toni Kroos and Luka Modric as the trio of players up for that award. 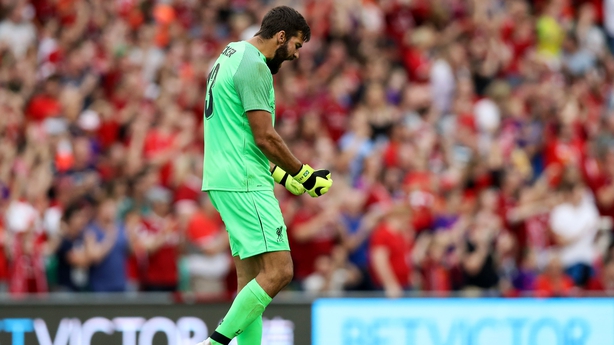 New Liverpool goalkeeper Alisson Becker could also be named as the Champions League's best goalkeeper for his performances at former club Roma, but the Brazilian will need to see off Madrid's Keylor Navas and Gianluigi Buffon - who played for Juventus but is now at Paris St Germain.

The best defender award will definitely go to a Real Madrid player as Marcelo, Sergio Ramos and Raphael Varane are the three nominees.

The nominees were chosen by coaches and journalists, with the winners announced during the draw for this season's group stage on 30 August.

💠 What are these awards?
💠 Who was 4-10 in each position?
💠 How were the players shortlisted?
💠 Who won last year?

The Europa League does not have individual positional awards but will crown a player of the tournament from 2017-18 when the group stage for that competition is conducted a day later.

Manchester United's late transfer target Diego Godin is one of three players shortlisted for the award - won in 2017 by Paul Pogba - with the Atletico Madrid defender in the running against team-mate Antoine Griezmann, scorer of two goals in the final win over Marseille - who have Dimitri Payet nominated.