Sarri also revealed he expects Eden Hazard to remain at Stamford Bridge after the Belgium international made his first Blues appearance since Russia 2018.

Belgium international Courtois has been reported to have stayed away from the London club following World Cup duty with Belgium amid speculation of a move to Real Madrid.

"I don't know in this moment," Sarri told a press conference after Chelsea's 5-4 win on penalties at Stamford Bridge when asked of Courtois' future.

"I want to speak with my club and then we will decide about it. I am here to talk about this match."

Chelsea are reported to have sealed a world record #71million deal for Athletic Bilbao goalkeeper Kepa Arrizabalaga, but Sarri refused to be drawn on any details of the potential signing.

When pressed on 23-year-old Kepa, Sarri added: "I saw him one year ago. My first impression was that he is a very good goalkeeper, very young, but very, very good."

Hazard, whose future has been in doubt all summer, was given a rapturous reception by Blues fans during their side's penalty shootout win against Lyon and Sarri said he had "no problem" with the midfielder.

Sarri added: "We have spoken two or three times in the last two days. Hazard's problem is not present now."

Courtois was handed an extended holiday after finishing third at the World Cup with Belgium and was expected to return to the Blues' Cobham training base on Monday, but did not attend.

Reports suggested he was also absent on Tuesday, having told Sarri he wanted to leave the club before Thursday's transfer deadline.

Should Courtois - signed from Genk in July 2011 before spending a three-season loan spell with Atletico Madrid - not resume training with the Blues, he is likely to face an internal disciplinary meeting and the potential of a fine of up to two weeks wages.

The likes of Kepa, Jan Oblak of Atletico Madrid and Stoke's Jack Butland are potential replacements should Courtois depart, but all parties are up against the transfer deadline to get any potential deals completed.

Chelsea, meanwhile, could also be set to make another addition to the squad with a loan deal for midfielder Mateo Kovacic from Real Madrid, according to reports in Spain. 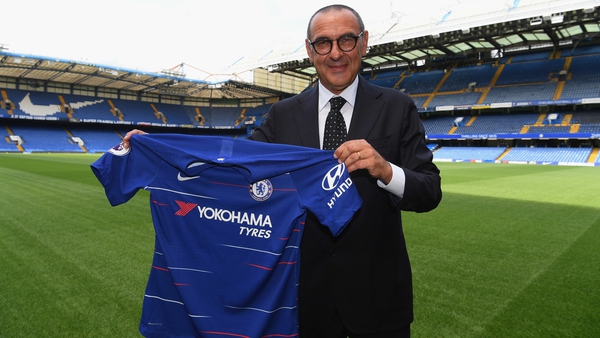