New signing Alisson Becker made his Liverpool debut as they cruised to a facile 5-0 win over Napoli in front of a packed Aviva Stadium.

After impressive wins over Manchester City and Manchester United already on their pre-season tour, this was another encouraging performance from Liverpool ahead of the start of the Premier League next weekend.

To the delight of the vast majority of the crowd, James Milner fired Liverpool ahead after just four minutes; turning home from a Sadio Mane cross.

The Reds doubled their lead just five minutes later as Milner turned provider when his cross was nodded into an empty net by Georginio Wijnaldum, with former Watford goalkeeper Orestis Karnezis all at sea.

Alisson had little to do on his Liverpool bow, but had to react smartly to deny Lorenzo Insigne midway through the first half.

The Brazilian was saved by the offside flag minutes before half time after he was beaten to a through ball by Jose Callejon who tapped into an empty net, only for it to be ruled out. Replays suggested that the Spaniard was onside. 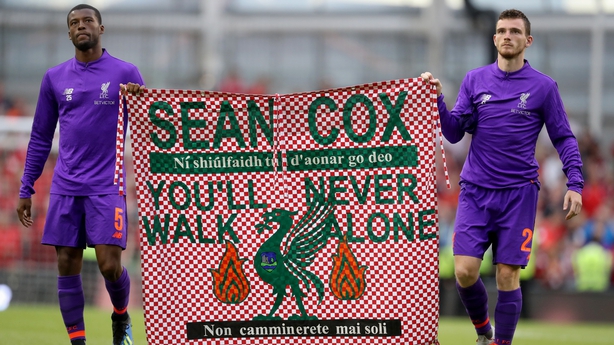 Liverpool took control in the second half and added a third through PFA Player of the Year Mohammed Salah just shy of the hour mark. The Egyptian curled emphatically into the top corner after Mane had won a tussle with Napoli defender Raul Albiol in the penalty area.

Daniel Sturridge added a fourth shortly after when he tapped home a rebound from a Divock Origi shot, before he set up Alberto Moreno with a glorious cross field pass and the Spanish full back wrapped up the scoring with a well hit drive.

After the final whistle, the Liverpool players paid a classy tribute to Irish fan Sean Cox, who is still recovering from an attack by Roma fans ahead of Liverpool’s Champions League semi-final clash with the Italians in April.

Liverpool players gathered in the centre circle and paraded a Sean Cox banner in front of the 51,000 gathered inside the Aviva. The banner read "you’ll never walk alone" in Irish, English and Italian.