Tottenham battled back from a two-goal deficit to draw 2-2 with Barcelona before falling in a penalty shootout in the International Champions Cup in Los Angeles.

Munir headed Barcelona ahead after 15 minutes before Arthur drilled home a second to put the Spaniards 2-0 up in the 30th minute.

Christian Eriksen rattled the post with a 30-yard free-kick before Tottenham got back into the game 16 minutes from time when Son Heung-Min scored from close range after Eriksen's initial shot was blocked.

Georges-Kevin N'Koudou then levelled a minute later in a goalmouth scramble after Anthony Georgiou had a shot blocked and Son backheeled the ball to N'Koudou who converted.

The game then wait straight to penalties but Georgiou saw his effort saved by  Jasper Cillessen and Barcelona converted all five penalties to secure a 5-3 victory. 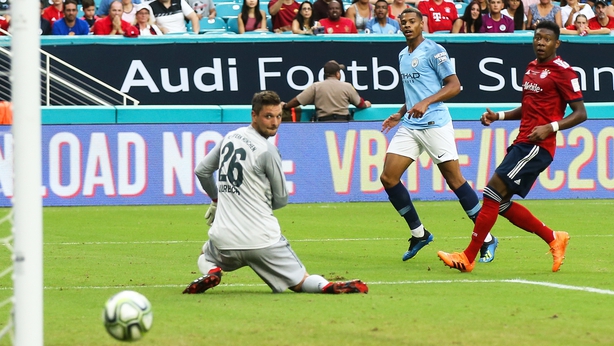 Manchester City fought from 2-0 down to overcome Bayern Munich 3-2 in their International Champions Cup campaign.

The German champions went 2-0 up after both Meritan Shabani and Arjen Robben found the net within 23 minutes.

Just before the break, City narrowed the deficit as Bernardo Silva found the bottom corner, while 19-year-old Lukas Nmecha equalised five minutes into the second half.

Silva, who stepped in after new signing Riyad Mahrez was taken off injured in the first half, secured the victory with a low shot after 70 minutes