Liverpool manager Jurgen Klopp has defended the decision to make Alisson the world's most expensive goalkeeper.

The Brazil international moved from Roma earlier this month for €75m, but the Reds boss believes it was a necessity in a small market place and said there were even more costly options out there.

Atletico Madrid's Jan Oblak was another of Klopp's targets, but he proved prohibitively expensive.

"The goalkeeper market is different because it's not each year that there is anybody available. 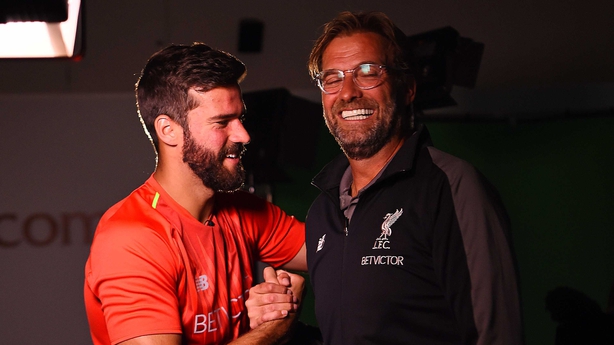 "We didn't know exactly if Alisson is available or not, but from a specific moment we realised obviously he is available and that's the moment when we decided we want to go for him."

Klopp has had problems with goalkeepers, with Loris Karius taking over from Simon Mignolet midway through last season and doing a good enough job until two huge mistakes in the Champions League final defeat to Real Madrid.

It was later revealed Karius had been suffering from concussion and, while it intensified the need for change, the manager was only prepared to consider a new goalkeeper if a significant upgrade could be found.

"We are really fine with our goalkeepers. So there's no doubts (about) Simon Mignolet - big quality, absolutely Premier League highest-level quality, Loris Karius as well," he added.

"Yes, we all know what happened in the final, but we know as well why it's not about that. It's not the reason (for signing Alisson).

"We really wanted to bring in a player which we didn't have before to be honest and that's what happened with Alisson."

Roma president James Palotta was happy with his club's end of the deal.