By Brendan Graham at Dalymount Park

The home fans were barely in their seats and Keith Ward had the ball in the back of the net but the Bohemians player was judged to be offside by the linesman on the stand side.

Four minutes later Bohs took the lead through debutant Kelly and the rout was underway.

The early goal gave them the early shot in the arm from a confidence point of view as they dominated the early proceedings with Keith Ward and Dinny Corcoran having chances to increase the home sides lead.

Kelly's perfect start was made even better when he showed fantastic composure to slot the ball into the far corner past Bray keeper Evan Moran on 21 minutes after Keith Ward’s initial effort was blocked.

Dinny Corcoran had the home side 3-0 to the good on the half hour mark, converting a penalty from the spot after Ward was hauled down in the box when through on goal. 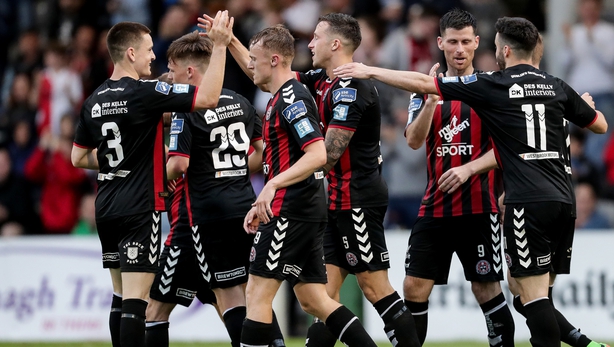 Kevin Devaney got in on the action for the Gypsies three minutes before the break when his superb long- distance curler nestled in the far corner of the net.

Those who were late to their seats at the start of the game may have missed two goals on the night as Rob Cornwall gave Bohemians their fifth from a headed effort just two minutes in.

Corcoran was denied his second of the night from the penalty spot with Bray goalkeeper making a fantastic save at full stretch to keep the deficit at five.

With ten minutes to go substitute Christian Magerusan got the sixth for Bohs as he connected with a swinging half volley to get his league campaign up and running.

Keith Long's side leapfrog Sligo Rovers for the time being into seventh with Bray remaining bottom of the league, nine points adrift of Limerick.