Roy Keane says the footballing world is still in shock over the death of Liam Miller.

"We’re still shocked what's after happening to Liam," Keane, who will manage a Manchester United Legends team against a combined Celtic / Ireland side for a testimonial game in honour of Miller, told RTÉ: "Liam was 36 with a young family.

"Unfortunately in sport we all get obsessed about winning and losing, contracts etc but the bottom line is your health is the most important thing."

Keane, a former United captain and team-mate of Miller, is the current assistant manager with the Boys in Green, and confirmed that former Red Devils Denis Irwin, Ryan Giggs, Paul Scholes and Jaap Staam will be among those lining out for the game at Turner’s Cross on 25 September.

The Ireland / Celtic team will be managed by Martin O'Neill. 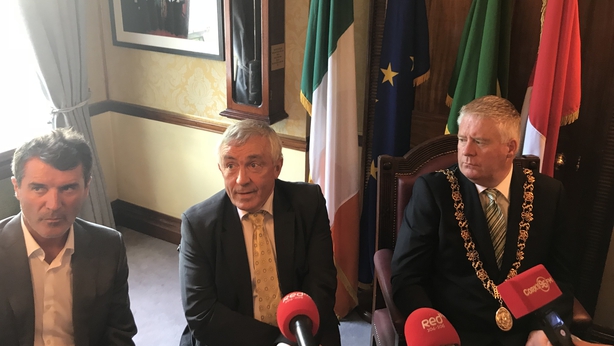 "It will be a great occasion, the game and the function back here at the City Hall afterwards," added Keane.

"It gives people a chance to pay their respects and we’re all looking forward to it and I’m sure the Cork public will respond well to it and get right behind it. I know they will."

'It will be a great occasion and gives people a chance to pay their respects' - Roy Keane was in Cork today as details of a Liam Miller tribute match were confirmed pic.twitter.com/if1xmt2u0H

The Lord Mayor of Cork, Councillor Mick Finn, said he was disappointed but understood why the GAA was unable to make Páirc Uí Chaoimh available for the match.

The recently renovated stadium has a capacity of 45,000.

Cllr Finn said he had made an approach the Cork County Board regarding the availability of the stadium, but the board responded that Croke Park was the only GAA stadium in the country where games other than Gaelic games could be played.

He said he was told by the Cork County Board that a rule change at GAA congress would be required to allow the match to proceed at Páirc Uí Chaoimh and he said he understood this.

Tickets for the black-tie dinner and panel discussion to be held the night of the tribute match at Cork City Hall have almost sold out. Tables of 12 for that event are priced at €4,000.

Tickets for the tribute match, at €50 each, will go on sale through ticketmaster.ie at 10am this Friday.