Chelsea are close to appointing Maurizio Sarri as their new head coach and signing midfielder Jorginho, according to Napoli president Aurelio De Laurentiis.

The Blues have reportedly lined up Sarri to replace current boss Antonio Conte following their poor Premier League title defence and failure to qualify for next season's Champions League.

Sarri remains under contract with the Serie A club, despite their decision to replace him with Carlo Ancelotti.

De Laurentiis, speaking at a press conference on Wednesday to unveil new coach Ancelotti, said: "The Sarri affair is nearly at its conclusion, it all depends on him.

"My lawyers have submitted papers to his lawyers."

Sarri spent three seasons in charge of Napoli but was unable to wrestle the title from Juventus, finishing fifth, second and third.

Conte, meanwhile, won the Premier League title in his first season in England, but came under incessant pressure during a difficult second campaign which ended on a high with him lifting the FA Cup. 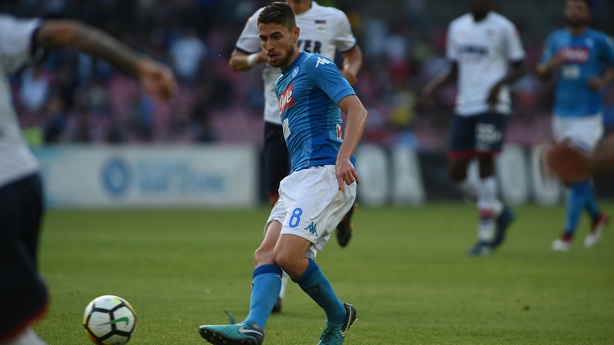 The 26-year-old was reportedly set to join champions Manchester City, but, according to De Laurentiis, the player would prefer to live in London.

He added: "Jorginho? Although we consider him to be a great player, for the sake of Ancelotti's style of football and knowing that the interest from Chinese clubs in (Napoli midfielder Marek) Hamsik was relative, we decided to assess the bids, which originally came from City.

"I have to apologise to Khaldoon (Al Mubarak, the Manchester City chairman), because I closed a deal with him 15 days ago, but Jorginho would prefer to live in London than Manchester, I can understand that and especially if Chelsea pay him more.

"My agreement with (Chelsea owner Roman) Abramovich (on Jorginho) is irrespective of whether or not Sarri ends up taking charge of the Blues."