There's something about Legia.

The Polish champions were handed a third trip to Ireland in four years when they drew Cork City from the hat in the Champions League first qualifying round in Nyon. They are a familiar foe.

After the pairing was confirmed, the Leesiders' official club account tweeted: "Hi @LegiaWarsawEN , nice to meet you. We're @CorkCityFC - the Double Champions of Ireland. We play at Turner's Cross. We just signed a player from the Premiership and our players score goals from 100+ yards. See you in a few weeks!"

The reply was swift.

"Hey, @CorkCityFC, nice to meet you too. We’re Legia - 14-time Polish champion, 19-time domestic Cup holder and our players are able to score two goals without shooting, so we’re not impressed. See you in a few weeks!"

Cork City face Legia Warsaw tomorrow in their first Champions League tie in 13 years. @CorkTod spoke to manager John Caulfield and Conor McCormack on the eve of the encounter pic.twitter.com/hZja1BTZ7k

This is a really difficult draw for John Caulfield's men. They could have been facing the likes of Ludogorets Razgrad, Malmo, Rosenborg and HJK Helsinki - all more appealing challenges - and have arguably been handed the toughest possible test at this stage of qualification, particularly with the second leg away.

On the bright side, if they do fall short, last season's double winners will go straight into the third round of the Europa League qualifiers, two rounds from the group stages.

Irish sides have fared respectably against Legia without ever getting over the line.

St Pat's were seconds away from a famous win in Warsaw back in 2014 before Miroslav Radovic struck in injury-time to cancel out Christy Fagan's first-half opener. Legia won the return leg at Tallaght Stadium 5-0.

Dundalk gave it a right rattle two years ago despite losing the first leg at the Aviva Stadium Park 2-0. 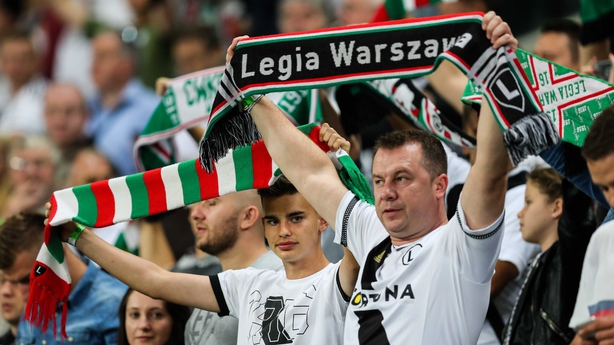 Stephen Kenny's men took the lead through a super Robbie Benson volley in the second leg and were pushing for the leveller that would have forced extra-time when Michal Kucharczyk break at the death to wrap it up for the hosts.

So Cork are going to require two huge 90-plus-minute performances to pull this off.

Poland international defenders Michal Pazdan and Artur Jedrzejczyk both played at the World Cup in Russia and are due to come back into the Legia fold just before the second leg.

Their season doesn't start until Saturday week, against Ekstraklasa at the Polish Army Stadium.

The Airtricity League Premier Division representatives can take some comfort in their opponents potentially being a bit rusty then, and the availability of Damien Delaney, who said the lure of European football was a big factor in his decision to rejoin his hometown club from Crystal Palace, is a great lift.

Goalkeeper Mark McNulty rolled his ankle in the closing stages of last Friday's stalemate with Shamrock Rovers and is described by Caulfield as being "50-50" to make it. Peter Cherrie is an experienced and capable deputy.

Garry Buckley, Colm Horgan, Alan Bennett, Graham Cummins and Steven Beattie have all also had knocks and are being assessed ahead of the game.

"It's a great occasion for us," Caulfield told RTÉ Sport's Tony O'Donoghue. "It's a sellout crowd, 7,000 - we could have sold a lot more.

"European nights are special. We're massive underdogs but at the same time we're at home. We're going to give it our best shot."

This game clashes directly with the World Cup semi-final between Belgium and France but nobody at Turner's Cross will be remotely concerned with how that one pans out.

It's the club's first taste of Champions League action since 2006, when they were knocked out at the second qualifying stage by Red Star Belgrade. The stadium officially sold out at lunchtime on Monday. This is the only show in town.

"We've a full house; it just shows the passion for soccer in Cork," added Caulfield.

"It's a very, very difficult game.

"We're playing a team that beat Celtic 6-1 three years ago in Europe. They were knocked out on a technicality afterwards but it shows you the level they're at. If we were playing Celtic tomorrow morning people wouldn't give us a hope.

"You're up against different cultures, different styles. It's different from your normal league match. That's the beauty about being in Europe and that's why players want to play in it.

"You know they're going to dominate possession. You keep things tight and need to defend really well. You'll always get opportunities but it's about making sure you're still in the game.

"We've done our work to see can we cause them trouble in certain areas.

"The odds are totally against but, as I keep saying, maybe it will be one of those special occasions."