Cork City are now four points adrift of Dundalk at the top of the SSE Airtricity League Premier Division as they were held to a scoreless draw by Shamrock Rovers at Turner’s Cross on Friday evening.

A brilliant second-half penalty save from 16-year-old Gavin Bazunu to deny Kieran Sadlier was enough to earn Rovers a share of the spoils and end City’s eleven game-winning run at home in the process.

City made three changes to the side that suffered a last-minute defeat to Dundalk at Oriel Park last Friday evening.

Karl Sheppard, Conor McCarthy, and Garry Buckley came in for Barry McNamee, Jimmy Keohane, and the injured Colm Horgan while new signing Damien Delaney had to make do with a place on the substitute’s bench.

Following a tame opening to proceedings, Gearoid Morrissey had the game’s first strike in anger in the thirteenth minute but his shot from distance drifted wide of the target. 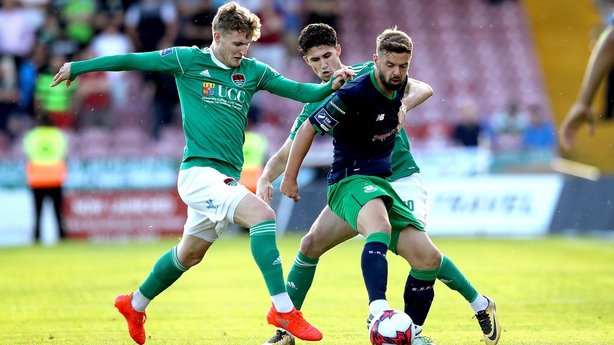 Stephen Bradley made two changes to his Rovers side which beat Derry City 2-0 at the Tallaght Stadium last time out as Ethan Boyle and Greg Bolger replaced David McAllister and Joel Coustrain.

And Bolger went close to scoring on his first appearance back at Turners Cross since leaving Cork during the winter break.

The former City captain decided to try his luck from his distance late in the half but his ambitions weren’t rewarded as his powerful shot sailed over the bar with what was Rovers’ only genuine attempt in the first 45.

Cork started the second half on the front foot and they went close to finally breaking the deadlock shortly after the restart.

Kieran Sadlier’s clever through ball picked out Graham Cummins’ run into the penalty area but the striker drilled his attempt wide of the near post.

What a way to start your senior career ??#HesOneOfOurOwn pic.twitter.com/4xvP3mDH1G

The Leesider’s had the perfect opportunity to take the lead just shy of the hour mark as they were awarded a penalty when Karl Sheppard was bundled over inside the box by Joey O’Brien.

But Sadlier, who had previously scored all five of his penalties this season, was denied thanks to a stunning save low to his right by youngster Gavin Bazunu.

Sadlier tried to make amends for that miss as the game drew to a close as he fired a number of long-range efforts towards goal but it wasn’t to be as the Hoops held on for the draw.

The next game for both sides sees them begin their respective European campaigns with City taking on Legia Warsaw in the Champions League while Rovers face AIK FC Stockholm in the Europa League.