A match both sides were desperate to win after Mexico stunned Germany in the group opener was decided when Viktor Claesson went down from a challenge by Kim Min-woo with referee Joel Aguilar pointing to the spot after checking the footage.

Swedish striker Marcus Berg had the best opportunity to break the deadlock from open play but side-footed the ball into the knee of South Korea goalkeeper Cho Hyun-woo from point blank range in the 21st minute.

Cho, a surprise selection between the posts, will take credit for that reflex save, and another early in the second half that denied Ola Toivonen, but was sent the wrong way by Granqvist's penalty.

Sweden had not scored in three outings prior to the tournament but they showed the greater attacking intent in the first half.

Granqvist, without defensive colleague Victor Lindelof of Manchester United due to illness, had an early opportunity after breaking from deep. He combined well with Berg, who returned his pass with a neat backheel, but Kim Young-gwon produced a fine tackle to frustrate him.

Korea goalkeeper Jo Hyeon-woo then justified his unexpected selection, having been regarded as coach Shin Tae-yong's third choice, by producing a fine point-black save to deny Berg. Ola Toivonen headed wide from the resulting corner. 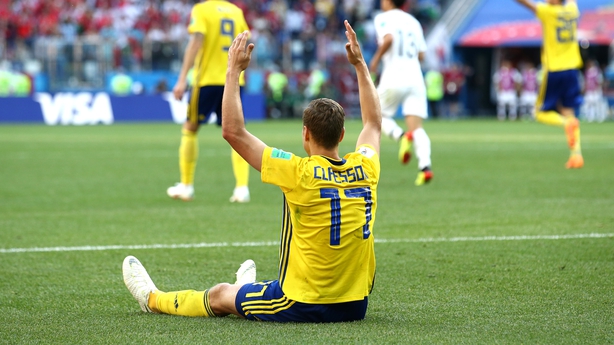 Korea suffered a blow when left-back Park Joo-ho was forced off midway through the first half with a hamstring injury and Sweden threatened again moments later through Berg, but again Young-gwon got in the way.

Tottenham's Son Heung-min created a rare Korea opportunity as he broke away from Granqvist but he was unable to pick out a colleague in the box.

Berg had another chance before the break as he controlled a long ball on his chest and took it away from the keeper but he could only lob across goal.

Mikael Lustig picked out Claesson with an inviting cross on the stroke of half-time but his header was deflected wide.

Korea began the second half more positively with Koo Ja-cheol heading narrowly wide but Sweden soon regained control and Jo again did well to keep out a header from Toivonen.

The breakthrough came after 65 minutes as Sweden were awarded a penalty after video review. Referee Joel Aguilar initially allowed play to go on after Claesson was hacked down by Lee Jae-sung but called a halt moments later, as Korea launched a counter-attack, after a word in his ear.

That proved the telling blow and Sweden were largely untroubled as they saw out victory.

Korea might have snatched an equaliser in stoppage time but Hwang Hee-chan was unable to keep his header on target.