Real Madrid have signed 17-year-old Brazilian striker Rodrygo from Santos in a deal thought to be worth around €45million.

Brazilian website globo.com claimed Santos agreed to lower their €50million release clause to €45million with Real paying Santos an initial €20million and the rest in instalments.

He will join up with his new team-mates in July 2019 - six months after turning 18 - and has reportedly agreed a contract keeping him at the Bernabeu until 2025.

A statement from the Spanish club on Friday read: "Real Madrid CF and Santos Futebol Clube have agreed that Rodrygo Goes will play his football at Real Madrid when he reaches the legal age requirement.

"Although the player would be able to play for our club as of January 2019, the agreement in place sets out that he will join the squad in July of that year."

Santos said in a statement: "We will still have the pleasure to see Rodrygo for another year in our famous shirt. We hope it will be an important period for the development of the player in Brazilian football and sporting achievements for Santos Futebol Clube.

"Santos FC is grateful for the attitude and professionalism of Real Madrid CF in this process, as well as the family and representatives of the player, who have sought a transparent and very good negotiation for all parties." 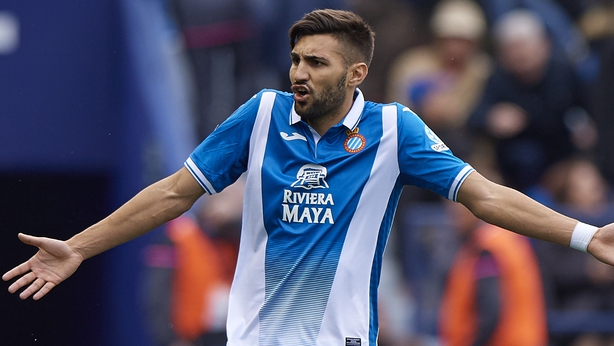 Meanwhile, Watford have signed defender Marc Navarro (above) from Espanyol for an undisclosed fee.

The 22-year-old Spaniard, who came up through the youth ranks at Barcelona, has agreed a five-year deal with the Hornets.