Russia coach Stanislav Cherchesov took a phone call during his post-match press conference and then told reporters it had been Vladimir Putin telling him to thank his players for their 5-0 demolition of Saudi Arabia.

It was a result few saw coming and neither Cherchesov nor Putin could hide their smiles as the hosts, ranked 70th and without a win in seven games, produced one of the most emphatic opening-day performances in World Cup history.

The former Soviet Union goalkeeper had been under huge pressure coming into the match at Moscow's Luzhniki Stadium. A phlegmatic character, he said the win would not change his demeanour, results never do, but few in the room believed him.

Asked if there was a risk his players could get big-headed, the 54-year-old said: "I don't think there's a danger of that, we know why we're here.

"We went for a walk before the game and we talked about how this tournament is just the beginning. OK, we won 5-0 and we got three points but it could have been a draw and only a point - we would still have to get out of the group.

"We won our first game at (last summer's) Confederations Cup and it didn't take us too far. So we're on the right track but we should turn the page and forget this game."

Russia play Egypt on Tuesday and the expectation levels here will now go off the charts.

Cherchesov is well aware of that and he warned fans that Russia's World Cup is like a "crescendo" with each game getting tougher: Saudi Arabia, Egypt and finally Uruguay.

He also admitted that Egypt with Mohamed Salah is a different proposition to Egypt without him and Cherchesov said he would be watching Friday's game with added interest to see if the Liverpool star has really recovered from his shoulder injury.

Russia, however, may have uncovered a star of their own in man-of-the-match Denis Cheryshev.

Uncovered might sound unfair for a 27-year-old who started at Real Madrid and has spent the last two seasons with Villarreal, but his has been a stop-start career and he began this game on the bench. 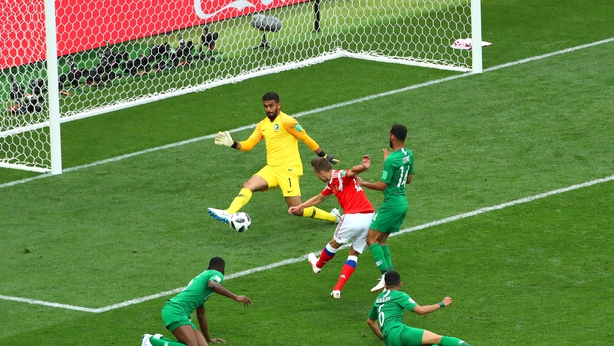 But when Alan Dzagoev went down with what could be a tournament-ending hamstring injury, Cheryshev seized the moment.

His first goal came in the 43rd minute when he calmly cut inside two covering defenders, leaving them both on the floor, and smashed home with his left foot. The second, in injury time, was even better, as he raced on to a knockdown and curled a shot past the flailing keeper with the outside of his foot from distance.

"There are no words to describe how I'm feeling," said Cheryshev, before settling on "happy".

He also neatly swerved questions about why he did not start and said he did not think much about either goal, as they both happened so fast.

"I just kicked it and scored," was how he summed up his second.