Colin Bell says the future for Ireland is bright despite a third consecutive defeat ending their Women’s World Cup chances.

The Girls in Green fell to a 1-0 loss in Norway, a result that means their dream of competing in next year’s tournament in France is over.

However, a home defeat to the Dutch and back-to-back losses against Norway, ranked 14th in the world, scuppered Irish hopes.

But manager Bell says he saw enough in the season to give him reasons to be optimistic. 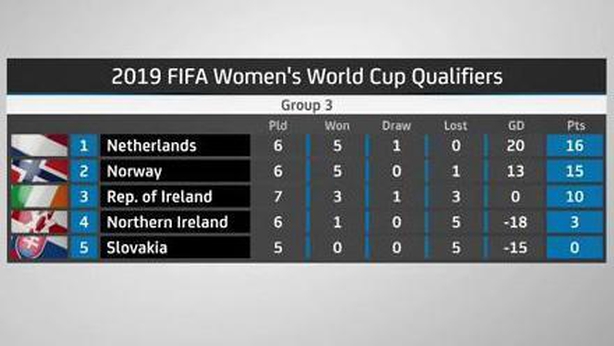 Speaking to RTÉ Sport, he said: "It was a very close tie. Again, [the goal comes from] a set piece basically.

"But we had enough chances to score and it was a really terrific performance from the girls.

"I said when we lost to Holland, I don’t want this ‘defeat mentality’ to creep in, that won’t creep in as long as I’m here but we can be proud of the performance and we should have got something out of this game.

"It’s those little elements that we have to improve on. The coach from Norway, Martin Sjogren, said we definitely deserved a result tonight."

And Bell was full of praise for the next generation.

"That’s why I’m optimistic about the future," he said.

"We’ve got some really good young players. We put Izzy Atkinson on so she could get her first cap, she’s also one of those top talents, Tyler [Toland] again another fantastic effort, Leanne Kiernan putting in a lot of effort.

"We just need to work on the details. We’ll be bring in others so the future is good and I’m just very pleased that we showed everybody we can react and learn very quickly."