The Republic of Ireland women's team are facing into a crucial double-header of World Cup games against top seeds Norway, as they continue their quest to book a spot in their first ever major tournament.

Ireland's unbeaten run in the campaign came to a crashing halt against the European champions Holland back in April, but World Cup qualification is still very much a possibility if they can navigate their way through these upcoming ties. They also have a final game against Northern Ireland coming up in August.

The Netherlands are currently in pole position in Group 3 and their top spot looks secure as we approach the latter stages of the Group 3 fixtures.

Ireland's best chance of getting to next year's tournament is to target second place on the table but Norway are also in contention for that spot as they sit just behind Ireland in third place with a game in hand.

It's all to play for as the two sides prepare to meet on Friday evening, and crucially for Ireland, their opponents will be without Olympique Lyonnais star Ada Hegerberg, who is currently taking a break from international football.

Ireland of course have some notable absentees of their own due to a combination of injuries and Leaving Cert obligations. These include Megan Campbell, Stephanie Roche, Roma McLaughlin and Saoirse Noonan, while injury doubts linger over regulars such as goalkeeper Marie Hourihan and Harriet Scott.

But Ireland have already proven themselves to be a resilient side in this campaign and they will be hoping to utilise the home advantage when they welcome Norway to Tallaght Stadium for the 5.30pm kick-off. A quick turnaround then follows as Bell's squad travel to Norway for the second fixture on Tuesday 12 June.

Having previously managed in Norway, Bell is quite familiar with some of Norway's players and he remarked on Herlovsen's goal-scoring abilities in the build-up to Friday's game.

Herlovsen is an experienced campaigner for Norway, and was the youngest player at the 2005 Uefa Women's Euros.

She was on target against Northern Ireland in their World Cup qualifier earlier this year, scoring her side's third goal in injury time.

The Vålerenga club player also has a skill for sneaking in behind the defensive cover to create one-on-one situations, which Ireland will have to be vigilant of. She executed this twice during an international friendly against Sweden in 2015 and came away with goals both times after lobbing the ball over the keeper's head.

Utland has already scored twice during these series of qualifiers, finding the back of the net against Northern Ireland and Slovakia last year.

Norway won both of those fixtures comprehensively, coming away with 4-1 and 6-1 wins respectively. Utland opened the scoring against the Slovaks after just three minutes when the sides met in September, where she demonstrated the kind of dangerous skills that could hurt Ireland if she gets the nod to start on Friday.

After a long ball was delivered into the penalty area, Utland timed her run perfectly to get herself into position and control it on the chest before hitting a low shot into the net on the half volley. 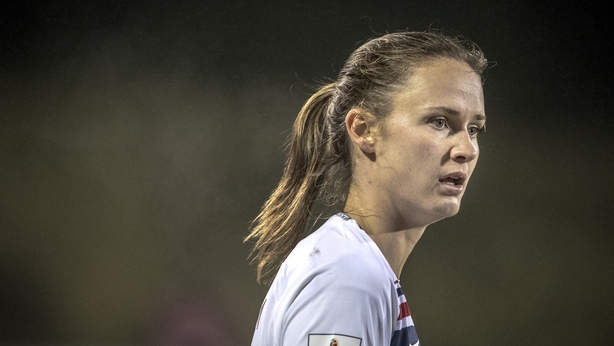 Hansen has also proven to be proficient in front of goals in this campaign, and is currently Norway's their top-scorer with six goals after four outings in Group 3.

She was also on target in those big wins over Northern Ireland and Slovakia, scoring penalties in both fixtures. Hansen repeated the feat in the second clash against the North back in April and scored both goals from open play in the second half.

Hansen, who Bell recently described her as 'probably one of the best dribblers worldwide,' plies her club trade with VFL Wolfsburg. The succesfull German side completed the league and cup double earlier this season. 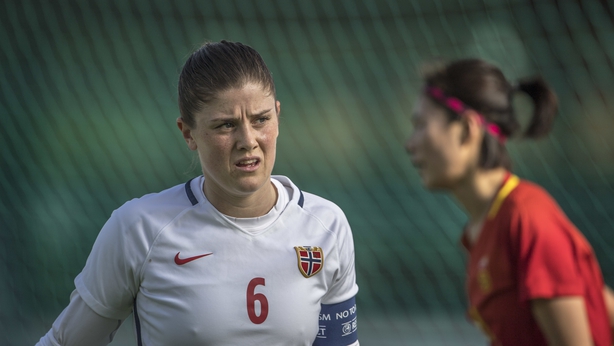 28-year-old Mjelde is the Norway captain and has previously crossed paths with Bell when he was the manager of Avaldsnes IL.

She joined Chelsea in January 2017, scoring 24 goals on the way to helping the London club to win the Women's Super League 1 and FA Cup in her first season. She's a versatile player who is capable of playing both in midfield and at centre-back positions.

Mjelde has since signed a three-year contract with Chelsea, which will keep her there until the summer of 2021.