It's as you were in the bottom three of the Premier Division as neither Sligo Rovers or Limerick were able to find the net at the Showgrounds.

Limerick twice hit the crossbar in the opening half of this relegation six pointer, while Sligo finished the game with ten men after John Mahon was sent off after his second yellow late on.

Rovers remain ahead of Tommy Barrett's charges by virtue of a superior goal difference.

This was certainly a slow burner between two of the league's lower-scoring outfits.

Lewis Morrison dragged his shot on the turn past Brendan Clarke's post five minutes in, following decent build up play in the Rovers attack five minutes in.

But that was about it as both sides struggled to provide much goal-mouth action in the opening half hour.

Indeed it took all of 34 minutes of action for either team to register the evening's first real talking point.

Cian Coleman's twisting header coming back off the Sligo crossbar, moments before Daniel Kearns whipped set-piece cannoned back off what was almost the same spot.

Rovers went close again five minutes from the break. Clarke equal to Morrison's improvised flick at the front post having ran on to Seamus Sharkey's cross from the right side.

Both sides had only managed two league wins in their previous ten outings running up to this clash.

Eoin Wearen came close nudging the Shannonsiders in front but flashed his glancing header past the post just short of the hour.

Rovers youngster Jack Keaney should have done better with the game's next opportunity on 66. The unmarked midfielder missing the target from close-range after Rhys McCabe's quick free-kick.

Rovers were reduced to ten nine minutes from time, when Mahon tripped Mark O'Sullivan, heralding what was a harsh second yellow for the 18-year-old.

Sligo goalkeeper Mitchell Beeney had to deal with two late chances for Coleman and O'Sullivan. The Chelsea loanee equal to both headed attempts in added time. 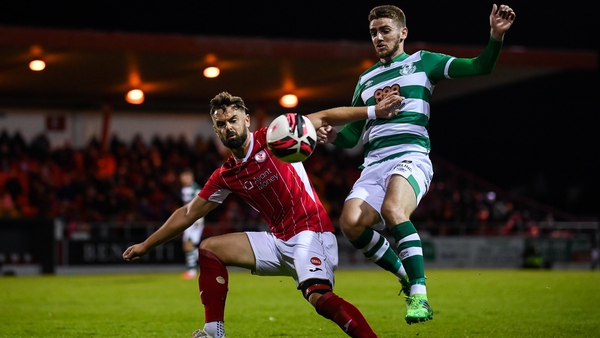