Leading through Robbie Benson's first-half opener, the Lilywhites rode their luck in the second with Sander Puri cracking the post just seconds before Tagbajumi slid a Michael Duffy cross past Lawrence Vigouroux to secure Stephen Kenny's side their fourth win the space of just 10 days.

The Blues were dealt a huge blow beforehand when striker Courtney Duffus was refused permission by his parent club, Oldham Athletic, to play on the artificial surface at Oriel Park and they were further disrupted by the loss of skipper Paul Keegan with a 34th minute injury.

Kenny's side completely bossed the opening 45 minutes with Dan Cleary forcing Lawrence Vigouroux into an early save from one of 13 corners won by Dundalk in the first-half alone. The on-loan goalkeeper also produced a superb fingertip stop in the 24th minute to tip Duffy's curler over the crossbar. 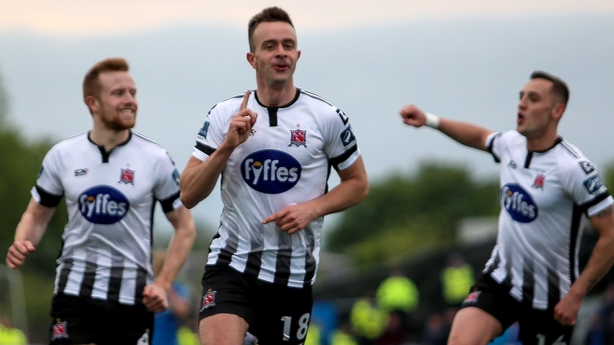 The breakthrough finally arrived 15 minutes later. Chris Shields was the architect, gracefully going past three players before shifting left to Duffy. His ball went all the way across to Benson and this time the midfielder took a touch before firing into the top corner.

Patrick Hoban should have doubled the advantage just seconds after the restart but he could only sky the ball with just Vigouroux to beat before Duffy almost brought the house down with a scorching run in the 68th minute but his effort went straight at Vigouroux.

The visitors showed a lot more purpose in the second-half and Gavin Holohan fired over before Rory Feely glanced a delivery from substitute Fayel Kasmi wide despite being unmarked in the six-yard box.

Dundalk continued to live dangerously and Alan Reynolds and his backroom staff were off the bench appealing in the 77th-minute when Feely went down at the feet of Gary Rogers but referee Rob Hennessy pointed for a goal kick.

Joy & relief at the final whistle after Marco Tagbajumi's injury time goal sealed a win that looked in doubt when Sander Puri hit the post before Issy Akinade flashed a ball across the face of goal very late on.  A big three points in the title race.

It looked like the Blues had taken a share of the spoils when substitute Puri let fly in the 90th minute but the ball cannoned off the upright and Duffy broke to put the ball on a plate for Tagbajumi to slot home the killer second.

The result maintains Dundalk's two-point lead over Cork City at the top of the table and moves them a further eight ahead of a Waterford side who have now lost two and drawn two since they beat the Lilywhites in the corresponding fixture at the RSC just 17 days earlier.