Eden Hazard's first-half penalty proved decisive as Chelsea salvaged their season by beating Manchester United 1-0 in the FA Cup final in what is widely-expected to be manager Antonio Conte's swansong.

The 137th FA Cup final - and first utilising a video assistant referee - was not as cagey as some had feared but was hardly a rip-roaring affair as the Blues looked to atone for last season's shock finale defeat and a tepid Premier League title defence.

Mourinho came into the match looking to frustrate his former club and write his name into the record books, but Conte - subject of so much speculation regarding his future - emerged triumphant as Hazard's first-half penalty secured a 1-0 win at Wembley.

Many had fancied United to win a record-equalling 13th FA Cup on Saturday, but the Blues showed a spirit and skill level that has been lacking at times this season.

Tension behind the scenes has led to an uneasy feeling growing at Stamford Bridge, but Conte and all those clad in blue enjoyed a moment to savour as Hazard marked his 300th appearance for the club with a first-half winner.

The 27-year-old earned the spot-kick from which he scored, with United struggling to gather a coherent response and then failing to beat Thibaut Courtois after the break as Paul Pogba wasted the greatest chance late on.

It will be a memorable end if, as expected, this proves Conte's last match as Chelsea boss, whereas Mourinho sees this season's Premier League improvements tempered by the conspicuous absence of silverware.

Wild celebrations met the final whistle - and again when skipper Gary Cahill lifted the trophy after receiving it from Jackie Wilkins, the widow of former United and Chelsea man Ray.

Giant banners commemorating Wilkins hung at both ends of Wembley as the teams emerged to pyrotechnics and anticipation - but first-half play was no match for the pre-match razzmatazz.

Both sides were wasteful in possession, but Hazard managed to fire an early shot across the bows when all too easily cutting away from Phil Jones - guilty of giving away possession in the first place - and forcing David De Gea into a near-post save.

Tiemoue Bakayoko and Alexis Sanchez saw appeals for spot-kicks rejected as the fragmented start continued, but there would soon be a penalty as United failed to heed their Hazard warning.

Shaky-looking Jones raced back to deny the Belgium international getting away his shot, only to end his run with a clumsy challenge that saw referee Michael Oliver give a penalty and yellow card. 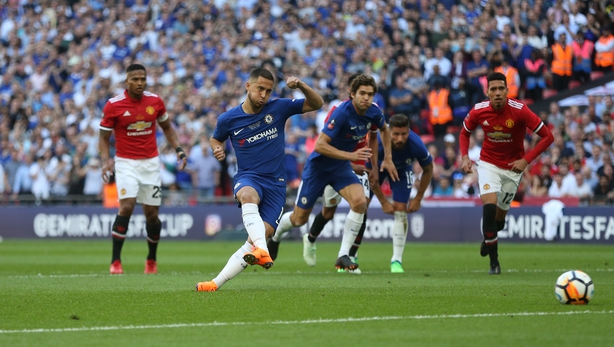 Hazard dusted himself down and coolly slid his team into a 22nd-minute lead that United failed to meet with a noteworthy response.

Pogba drove wide as the Reds stumbled on meekly without a focal point given Romelu Lukaku was unfit to start. They offered very little threat until the end of the half when Jones bundled wide and Marcus Rashford had a tame attempt blocked after a rare moment of quality.

Mourinho decided against any half-time alterations but his pep talk led to an upturn in intensity.

After Rashford's threatening free-kick was punched away and an Ashley Young cross-shot flew over, the former saw a snapshot denied by Thibaut Courtois and Pogba had an attempt deflected off target.

Nemanja Matic dragged badly wide as the United hordes drove their side on, cheering what they thought was a 63rd-minute leveller.

Courtois did well to deny Jones' header from a Rashford free-kick, but the assistant referee rightly called Sanchez offside when directing home the loose ball.

That intent left gaps for Chelsea to exploit. Hazard was proving a continual thorn in the side and Marcos Alonso saw a near-post attempt denied after N'Golo Kante opened the defence.

The latter had an attempt blocked and former Chelsea midfielder Matic stung the palms, with Pogba wasting a glaring opportunity to level eight minutes from time.

Unmarked in the box from a corner, he somehow conspired to head wide, with Matic's stoppage-time header off target the last moment of note before the blue half celebrated.