Limerick FC ended their run of four consecutive Premier Division defeats by becoming the first side to defeat Waterford FC at the RSC this season.

The Shannonsiders took full advantage of Waterford's sluggish start and forged out a 3-0 lead after just 21 minutes and while Alan Reynolds side pushed forward in the second half, the visitors were able to make the most of the space they left at the back.

Tommy Barrett's side went ahead after 10 minutes after Karl O'Sullivan earned a corner following Cian Coleman's surging run through midfield.

Conor Clifford, impressive for the visitors throughout the first half, drifted in a corner which was met by Danny Morrissey who glanced the ball into the far corner and the striker had a second three minutes later when he nipped in behind David Webster and finished beyond Vigouroux in front of the vocal travelling support.

Things went from bad to worse for the Blues when Stanley Aborah, who had already been spoken to by referee Graham Kelly for sarcastically applauding a decision, was given his second red card of the season for a wild tackle on Daniel Kearns in midfield.

While he appeared to take the ball, Kelly judged him to have lunged in and the visitors pounced within a minute when Billy Dennehy charged down the left wing and crossed for the unmarked O'Sullivan who neatly added a third. 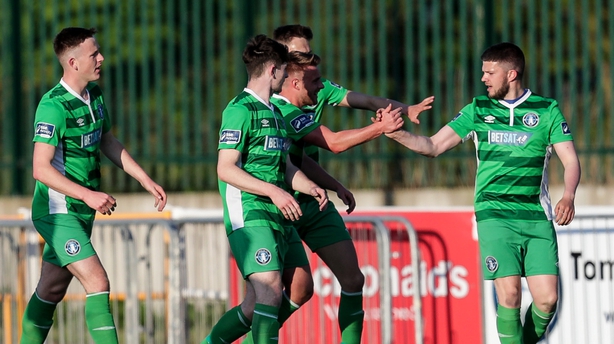 The Blues fightback began with 10 minutes left in the half. Izzy Akinade cracked an effort off Brendan Clarke's crossbar and a minute later the striker pulled the ball back for the onrushing Feely who finished neatly.

It appeared as if the home side had the numerical advantage in the opening ten minutes of the second half and the 1,774 in attendance were on their feet urging them forward after Courtney Duffus accelerated beyond the Limerick defence and calmly finished for his eighth goal of the campaign within a minute of the restart.

Waterford's high-risk strategy had Limerick on the ropes, Gavan Holohan had an effort deflected wide while Clarke palmed away an Akinade cross as the Blues flooded the box, but Limerick landed a counter-punch when former Blue Mark O'Sullivan finished Barry Maguire's squared pass in the box at the other end just before the hour mark.

The deficit was reduced to one again with ten minutes left after Duffus drilled a left-footed strike between the keeper's legs but in truth the home-side had left themselves too much to do.

A goal from Maguire and Billy Dennehy's penalty added even more gloss to the scoreboard for the Shannonsiders, who had only scored eight goals in the league prior to tonight's game.

Harps come from behind to beat Waterford in thriller

Bohemians beat the elements and Waterford