By Andrew Horgan at Turner's Cross

Cork City secured three crucial points in their pursuit of Dundalk at the top of the SSE Airtricity League Premier Division as they defeated Bray Wanderers 4-0 at Turner’s Cross.

Goals from Jimmy Keohane, Sean McLoughlin, Graham Cummins and the man of the match Garry Buckley ensured the Champions earned the win that sees them remain just two points behind the Lilywhites having played a game less.

City made two changes to the side that was held to a scoreless draw by Derry City at the Brandywell last time out with Kieran Sadlier and Conor McCarthy taking the places of Karl Sheppard and Alan Bennett, who dropped out of the squad entirely.

The champions made the perfect start to the match here as Jimmy Keohane broke the deadlock after just four minutes.

The versatile midfielder raced onto Barry McNamee’s inch-perfect through pass before lifting the ball over the advancing keeper and into the net for his first goal since his winner against Sligo Rovers a little over a month ago.

McNamee looked eager to switch from goal provider to goal scorer as the half progressed but he failed the beat the keeper with any of the three opportunities he fiercely struck towards the Bray goal.

Bray remained unchanged from the side that drew 2-2 with Waterford at the Carlisle Grounds on Monday night and they soon grew into the match.

Playmaker Gary McCabe caused the City defence problems with his set pieces midway through the half but centre-back Sean Heaney twice glanced the deliveries wide of the bottom right corner with his head.

And with the first half drawing to a close, the Leesiders would make Wanderers pay for squandering those opportunities as they doubled their lead through Sean McLoughlin. 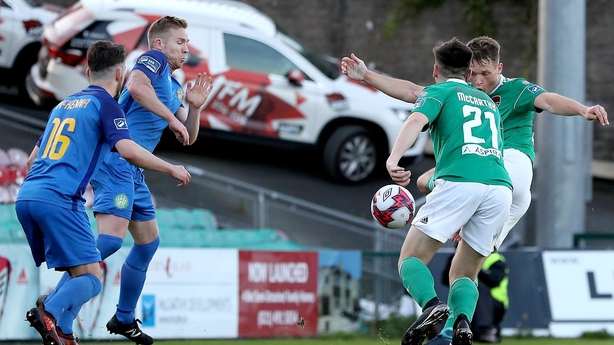 McNamee’s corner was headed back across the goal by Garry Buckley and after Graham Cummins helped the ball into McLoughlin’s path, the centre back drilled his half-volley past the keeper from close range.

John Caulfield’s side ought to have made it 3-0 at the beginning of the second half as Bray keeper Evan Moran failed to connect with his clearance on the edge of his own box, but Kieran Sadlier could only drive the loose ball over the empty net.

Cork would eventually seal the victory in the 64th minute as Graham Cummins punished another Evan Moran mistake, tapping home his ninth league goal of the season from a couple of yards after the Bray number one dropped Sadlier’s cross.

City turned the result into a rout with 15 minutes remaining as they made it successive 4-0 wins against Bray this season as Garry Buckley headed in at the back post following a superb cross from substitute Karl Sheppard.