A dominant Dundalk oozed quality and self-belief as they advertised their quality in Dublin with a convincing victory over Bohemians.

An early Patrick Hoban strike made a mess of Bohemians' defensive gameplan and the brilliant Sean Hoare made sure of the points late on.

With Derry and Waterford both suffering defeats, it now looks a two-horse race yet again, and perhaps a one-horse race if Dundalk are as convincing as they were here on a beautiful summer's night in Phibsboro.

The Lilywhites dominated the first quarter of the game, to the extent that Bohemians failed to get Dylan Watts on the ball for almost the entirety of the opening half; he again was peripheral in the second. Hoban headed over from a corner on two minutes but two minutes later he made no mistake.

Bohs were still trying to get a handle on their inferiority when Hoare angled the ball towards the hosts’ right-hand side of the box, Michael Duffy headed down and Hoban hooked home from close range.

Gradually, the home side warmed to the task, and they fashioned a nice chance midway through the half, but Gary Rogers was alert to block from Dinny Corcoran.

Hoare, more of a centre-back by definition but playing at right back, showed excellent skill to cross for Duffy on 27 minutes, but Shane Supple batted it over. 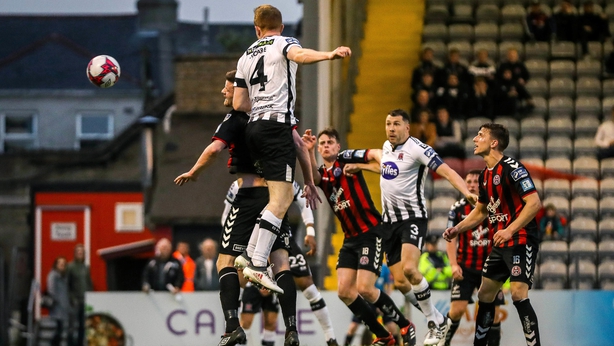 It was like as though Bohs didn’t rate Hoare’s quality on the ball and he again made space before, on his left foot, driving wide with Supple scrambling after the half-hour mark.

Dundalk should have doubled their lead just before the break as Dane Massey’s cross, which looked made for Duffy, met the flailing head of Graham Gartland, but he was under the ball and it cleared the bar.

There was controversy just before the break when Dinny Corcoran hooked the ball goalwards from a corner and, while it looked as if it flirted with going over the line, the linesman was unimpressed.

Stephen Kenny had his troops ready for the second half and they had Bohs caught asleep in the opening couple of minutes, with Hoban claiming he was held back in the box by Dan Casey, the Gypsies very lucky to escape without a penalty.

Gartland should have scored on 64 minutes but his downward header bounced over; one sensed Bohs still had a chance, but the visiting fans thought that Michael Duffy had put them two up with 22 minutes to go, his curling free-kick greeting the side-net.

Substitute Krisztián Adorján then linked up nicely with Duffy, whose cross really should have resulted in a better finish from Jamie McGrath.

However, Bohs rallied and Eoghan Stokes, who had a fine game, should have done better when getting space just outside the box.

Dundalk should have doubled their lead when Sean Hoare crossed for Duffy, who blasted off the top of the crossbar from a matter of yards.

Watts then was put clean through but Rogers did brilliantly to cover his angles after a superb Corcoran pass.

Hoare got the goal his man-of-the-match performance deserved after a box-pingpong with seven minutes left.

While the hosts had chances to smuggle a point out of the evening, they were generally outclassed by a Dundalk side that made light work of being without talisman Stephen O'Donnell.