Brendan Rodgers will take extra satisfaction from lifting the Scottish Premiership the second time around.

Celtic will finally get their hands on the league trophy on Sunday after their final game of the season against Aberdeen at Celtic Park, two weeks after beating Rangers to clinch the title.

It is their seventh in a row in the Scottish top flight and a second for Rodgers, but he claims this season has been a bigger challenge.

"We really earned it this year," the Hoops boss said.

"Last year was fantastic, great and this year there was bigger scrutiny on us and expectation and arguably a bigger challenge with the teams.

"So to win it and win the other week (against Rangers) was really special.

"Celtic's history is about winning the title, that is so important and it is only the second time in the club's history that we have won seven titles in a row."

Although the title is already decided, there is still something to play for for their opponents on Sunday, Aberdeen, who are looking to secure a fourth successive second-placed finish behind Celtic in the league.

Celtic have won their last 10 meetings against the Dons, but Rodgers expects a tough game against a side competing with Rangers for the title of second best in the country.

"We have actually played very well against Aberdeen. They always give us a tough game whether home or away," he said. "Don't take anything away from them.

"If they finish second at the end of the season, they deserve to be there.

"They are a consistent team. Yes, they have lost some games to us but like I say they have generally played very well.

"He will be happy with his season if he can finish second, (manager) Derek (McInnes) and then he will rebuild in the summer again." 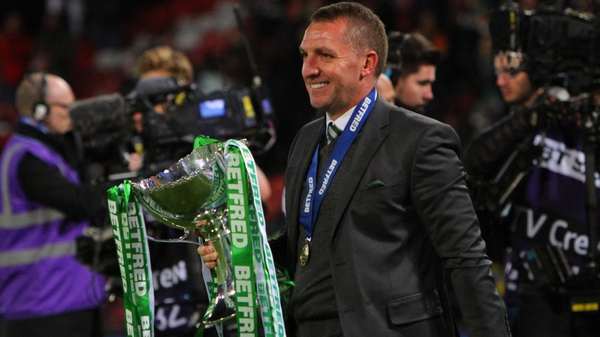 Rodgers not worried by Rangers "pack of cards" taunts