Napoli's Serie A title challenge petered out on Sunday when they twice squandered the lead in a 2-2 draw at home to Torino, leaving Juventus almost certain to collect the trophy for the seventh season in a row.

The title is a mere formality for Juventus after they were left with a six-point lead over Napoli - the only side who can catch them - with two matches to play and a goal difference which is better by 16.

The two sides are level on their head-to-head record.

Coach Maurizio Sarri buried his head in his hands when Lorenzo De Silvestri was allowed a free header to equalise for Torino in the 83rd minute.

"We passed the ball around very well but we made two mistakes which proved very costly," Sarri said.

"The championship was virtually over before the match and there was a risk we would play without motivation but that was not the case. It was one of our best performances in the last two months." 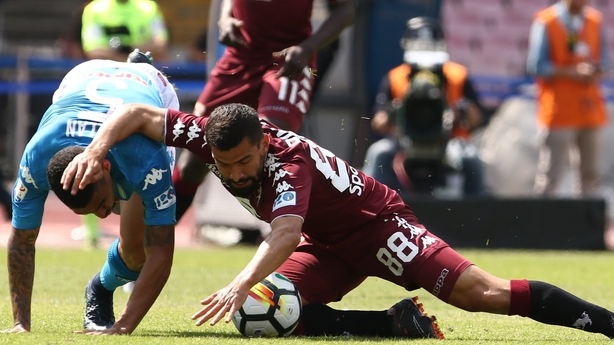 Torino defender Nicolas Burdisso gifted Napoli the lead after 25 minutes when he miscontrolled a pass, tried to play his way out of the penalty area and Dries Mertens stole in from behind to poke the ball into the net.

The Bulls stunned the San Paolo stadium by equalising 10 minutes after halftime with a Daniele Baselli shot which deflected off Vlad Chiriches and wrong-footed Napoli keeper Pepe Reina.

Napoli captain Marek Hamsik, who surprisingly started on the bench, was brought on after 69 minutes and made an immediate impact as he rifled home a 25-metre shot with his first touch two minutes later.

But Torino hit back again as Mario Rui allowed De Silvestri to get behind him and head in Adem Ljajic's floated free kick.

Inter Milan boosted their chances of a top-four finish, which would earn them a place in the Champions League group stage, with a 4-0 win at faltering Udinese.

Andrea Ranocchia, Rafinha and Mauro Icardi put Inter 3-0 up at halftime and Borja Valero added a fourth after Udinese had Seko Fofana sent off for stamping on Ivan Perisic.

Inter are fifth, one point behind AS Roma who play Cagliari later on Sunday, and two behind Lazio, who were held 1-1 by Atalanta. 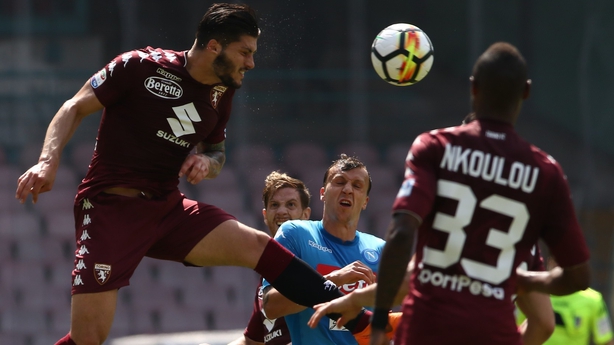 Nineteen-year-old Gambian Musa Barrow, the latest player to roll off their production line of young talent, gave Atalanta a second-minute lead and Felipe Caicedo scored from close range to equalise midway through the first half.

Fiorentina came from behind to win 3-2 at Genoa with late goals from Valentin Eysseric and Bryan Dabo after the hosts had forward Goran Pandev sent off for a wild tackle on Bruno Gaspar.

Genoa also had Ervin Zukanovic sent off from the substitutes bench for dissent.

Near the bottom, Cheivo beat Crotone 2-1 to leave both teams level with Udinese on 34 points, one above Cagliari who are in the bottom three. Verona and Benevento have already been relegated.