Merseyside Police has thanked Liverpool fans for their excellent behaviour before, during and after the Champions League semi-final second leg away to Roma.

The Reds lost 4-2 on the night but that was still enough to progress to the final 7-6 on aggregate.

There had been fears of clashes in the Italian capital between rival fans prior to the game, but the game passed off almost entirely without any incidents, with just one arrest reported to the police.

A statement from Chief Superintendent Dave Charnock read: "I would like to commend the Liverpool fans for their exceptional behaviour during last night's match in Rome.

"It was all very good natured and there were no major issues reported.

"One Liverpool fan was arrested by Italian police at the turnstiles on suspicion of common assault and a public order offence but we have not been made aware of any other arrests."

Before the game at the Stadio Olimpico, the family of Meathman Sean Cox - who remains critically ill after an unprovoked attack outside Anfield last week - thanked Liverpool and Roma for their support.

He was assaulted ahead of the Champions League first-leg semi-final. Two Italian men have since been charged over the incident.

"We would like to acknowledge the heartfelt support received from Liverpool and Roma football clubs. We have been touched by their solidarity and its sincerity over the past week and it has meant a great deal to both St Peter's and Sean's family." 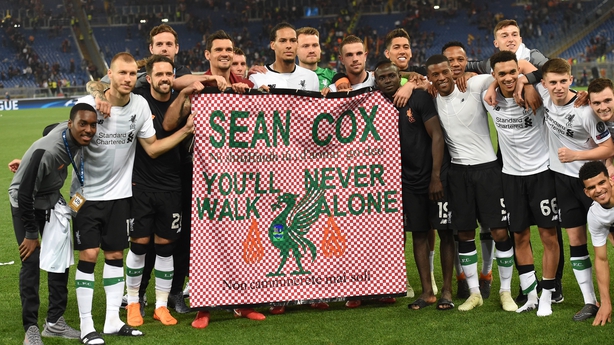