If Arsene Wenger's Arsenal finale is to be a Europa League final in Lyon his side will have to do it the hard way after surrendering a well-deserved lead to draw against 10-man Atletico Madrid in the first leg of their semi-final.

Even taking into account their 80-minute numerical advantage, this was one of Arsenal's best team displays of the campaign as a loud Emirates Stadium crowd saw Alexandre Lacazette head them in front following a largely-dominant hour of the tie.

But, as with many of Arsenal's recent campaigns, there was to be a late sting in the tail as defensive deficiencies were laid bare to all to see as Antoine Griezmann sealed a 1-1 draw with a late equaliser.

Before Lacazette's opener, Madrid were holding out for a goalless draw to take back to the Spanish capital for next Thursday's second-leg as Sime Vrsaljko was sent off early on, followed swiftly by manager Diego Simeone.

As the Atleti coach watched the remainder of the contest from the directors' box, Wenger afforded himself a wry smile as Lacazette - so nearly turning out for the visitors tonight - eventually broke the deadlock.

This was Wenger's final home European tie in charge after he announced last week he will step down in the summer after over 21 years in charge but it ended in now familiar disappointment.

Arsenal were at it from the off, Danny Welbeck crossing for Lacazette, whose shot into the ground came off the outside of the post with Jan Oblak beaten.

The highly-rated Slovenian stopper was called into action moments later as he pushed away a close-range Lacazette header following a smart Nacho Monreal cross.

Atleti's slow start was only compounded by Vrsaljko's early sending off, the right-back booked after just 90 seconds for fouling Jack Wilshere before being given his marching orders for a foul on Lacazette with barely 10 minutes played. 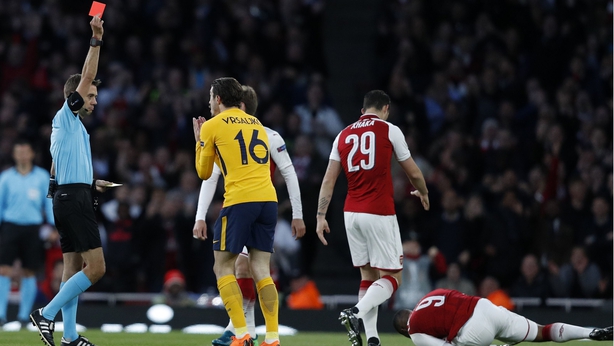 Simeone was incredulous on the touchline and was dismissed by French referee Clement Turpin shortly afterwards for another over-the-top reaction to a Hector Bellerin foul.

Arsenal's impressive start continued but a number of half-chances were passed by before Welbeck drew another good save out of Oblak, with Laurent Koscielny thrashing wildly wide at the back-post following the resulting corner.

The busy Lacazette, who was close to joining Madrid last summer before their transfer ban paved the way for Arsenal to step in, wanted a penalty but went down too easily under pressure from Diego Godin.

Nacho Monreal, who opened the scoring in Sunday's win over West Ham, flashed a half-volley wide with the opening 30 minutes played almost entirely in the Madrid half.

Griezmann looked to change that, finally forcing David Ospina into meaningful action with two driven strikes kept out well by the Colombian.

The hosts seemed to be running out of ideas as the second half began in a similar way to the first, but the deadlock was finally broken just after the hour as Lacazette rose high to head home Wilshere's looping cross.

Wenger's path as Arsenal boss has not been smooth in over a decade and his side managed to all-but gift the visitors what could prove a pivotal equaliser.

A long ball forward was not dealt with by Koscielny, whose weak attempt at over overhead clearance hit Griezmann with the striker's first shot squeezing through Ospina's legs before he converted past the back-tracking Shkodran Mustafi, who had already slipped over.

Oblak denied Aaron Ramsey with a fine late save to set up what promises to be an enthralling second-leg in Madrid.