It’s the league leaders against the champions at Turner’s Cross tonight as Cork City host Dundalk, live on RTÉ2 from 7pm.

City have five wins from five at home so far this season, with their most recent outing at Turner’s Cross a 1-0 win over Sligo Rovers last week. They followed that up with a 2-0 win away to Bohemians last Friday, to give John Caulfield’s side three wins in a row.

The Lilywhites meanwhile have yet to lose a game this season and sit atop the Premier Division table thanks to a superior goal difference to their hosts.

John Caulfield (Cork City): "It is a big game, a full house and it is about us trying to give that performance that we usually do at home. We know Dundalk are in flying form and are a very, very good side, but we are not a bad team either.

"We need to make sure that we are ready for the game. There is a great atmosphere and a great spirit in the squad; all the new players have really adapted to what we are looking for and they understand the pressure there is down here.

Stephen Kenny (Dundalk) "Our performance was very good last week. Overall I feel we are playing very well at the moment. The players are in good form and are playing well in every match. We have been on a good run.

"The players are passing the ball really well and showing a lot of invention in the final third. A lot of our young players are really emerging into the team. Turner's Cross is a great place to go and play and we are looking forward to it."

Cork City: The Rebels will go into the game without Johnny Dunleavy, who continues to work his way back from injury, but they do welcome Steven Beattie back from suspension.

Dundalk:  Dundalk have to plan without the services of Lithuanian international Karolis Chvedukas who is recovering from an ankle injury. Brian Gartland had an injection earlier in the week but it is hopeful he will be available for selection.

Daniel Cleary returned last Friday following a hamstring strain and Krisztián Adorján also comes back in after concussion ruled him out of the Limerick and Derry City contests. 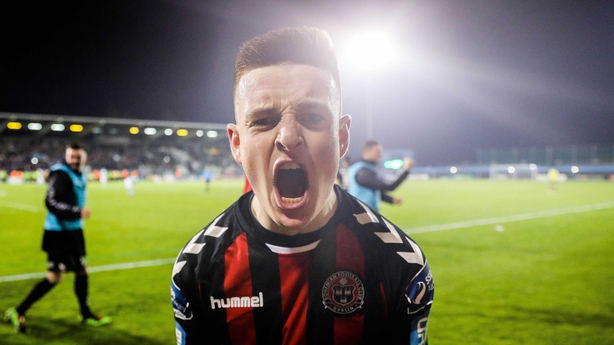 St Patrick’s Athletic welcome near neighbours Bohemians in Friday evening’s Dublin derby. Five points separate the teams in seventh and sixth and Bohemians could close that to just two with a win in Inchicore.

The Gypsies have just three wins this season with two of them coming against Shamrock Rovers and they come in to this game off the back of defeats to Cork and Derry.

St Pat’s drew with Sligo Rovers last time out as manager Ger Lyttle was forced to mark his first anniversary in change of the club with a scoreless draw.

Liam Buckley (St Pat's): "It's a derby so we know there'll be big crowds at the game from both sides but we have to try and approach it as normal and we've gone through the same routine as normal this week ahead of the game."

"We have done really at home in Inchicore in the last few weeks so we will be aiming to continue that run of form."

Keith Long (Bohemians): "St Pat's are a different proposition for teams than they were last season. They're not conceding many and have been in every game. They've drawn with Dundalk and knocked them out of the EA Sports Cup.

"They've gone up to Derry and down to Cork and were very unlucky in both, losing by the odd goal. So they're serious opponents for any team.

St Pat's: The Saints have a fully fit squad to choose from.

Bohemians: Paddy Kavanagh returns from suspension but will miss Monday's visit of Waterford to Dalymount Park after receiving an additional one-match ban for his red card against Derry City.

Danny Grant (hamstring) and Karl Moore (knee) will sit this one out. They join Derek Pender (calf), Ryan Swan (cruciate) and Cristian Magerusan (metatarsal) on the absentee list. 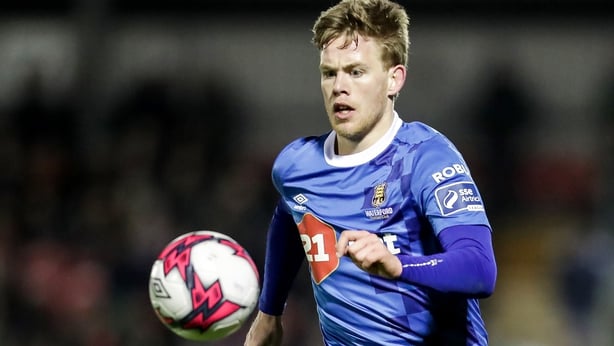 Surprise package Waterford host Sligo Rovers and will be hoping to make up ground on Cork City and Dundalk who face each other at the same time.

Four points off the top two and coming into the game off the back of a 3-0 victory against Bray, a win will see Waterford make up ground on one or possibly both side in the case of a draw.

Sligo meanwhile appear to be turning things around after some really poor early season form. A scoreless draw with St Pat's on Monday followed a narrow 1-0 defeat to Cork and a 2-1 victory over Limerick.

Waterford: The home side welcome back Stanley Aborah from suspension, while they'll have to sweat on the fitness of John Kavanagh, who limped off injured in the league game against Bray Wanderers.

Sligo Rovers: Adam Morgan, Seamus Sharkey and Rhys McCabe are doubtful because of injury. Michael Schlingermann (injury) and David Cawley (suspended) are definitely out. Captain Kyle Callan-McFadden is back however.

Alan Reynolds (Waterford): "We got lucky in Sligo earlier in the season with the last minute Courtney Duffus winner and I’ve seen them play a couple of games. They are decent and want to play the right way but we have to focus on ourselves. I think that if we are at our best at home we’ll take some stopping.

"We have an unbeaten record at home and we’ll be hoping to build on that against Sligo. We’re happy to take one game at a time and see where it takes us."

Gerard Lyttle (Sligo Rovers): "I feel we are getting a small bit of momentum in terms of our performances. After the Derry game we had a clear the air talk and since then there's been a greater intensity in many aspects.

"I don't think the table lies. Waterford are there are merit. In the last game it was tight, we had more possession and conceded with almost the last kick of the game. We're going down there confident because on our day we can beat any team in the league. 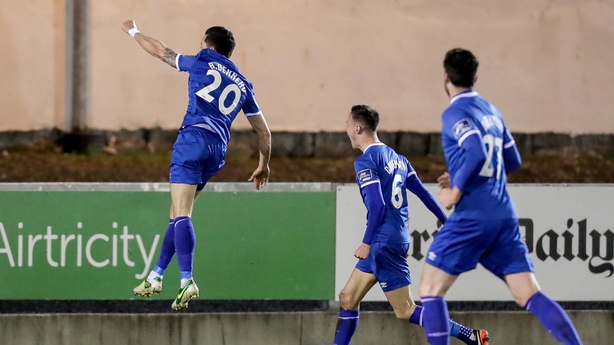 The bottom two sides meet at the Carlisle Grounds in a game that Bray must get something from to avoid being cut adrift at the bottom of the Premier Division.

With just one win and one draw from their opening 12 games, defeat for the Seagulls would leave them nine points behind Limerick who themselves have been struggling this season.

Bray Wanderers: Bray are in the midst of an injury crisis. John Sullivan, Darragh Gibbons, Aaron Greene, Darragh Noone and Jake Kelly are sidelined while academy player’s Adam Dempsey and Shane Flynn have been added to the first team panel.

Limerick: Manager Tommy Barrett is monitoring the fitness of a number of players, including Connor Ellis (groin), Darren Dennehy (ankle), Mark O’Sullivan (shoulder), Daniel Kearns (quad) and Conor Clifford (knee), while Cían Coleman is suspended for the next two games having been shown a straight red card in the draw at Shamrock Rovers.

Graham Kelly (Bray): "We have been very unfortunate with the injuries we have at the moment. We have the youngest squad in the league (average age 23) so to lose some of our more experienced player’s through injury is a real blow.

"However the lads have shown the past few weeks that our attitude and work ethic has been exceptional and we have no doubt that the team tomorrow night will again give us everything and hopefully we can get a positive result and three points."

Tommy Barrett (Limerick): "They’re all big games. We’re looking forward to it. We can only look after ourselves; we try to go and get results in every game, so hopefully we can get one on Friday.

"Bray are a decent side. I watched them against Rovers; the conditions were very poor and it was a difficult match, but I had a look at them against Waterford as well and you can see that they are trying to play. They have some very good footballers. It will be a tough game." 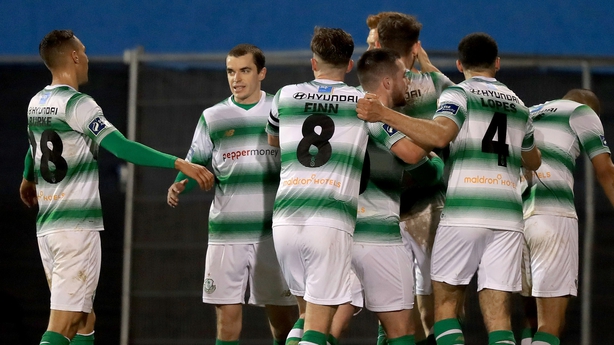 Fourth takes on fifth in the table when Shamrock Rovers travel to the Brandywell to face Derry but that tells only half of the story as the two teams are enjoying vastly different form.

Rovers have won just one game of their last eight and the pressure further increased on manager Stephen Bradley when the Hoops were dumped out of the EA Sports Cup when they lost 1-0 at home to First Division side Longford.

Derry meanwhile have yet to drop a point at the Brandywell, have overcome some early season wobbles and claimed a credible 2-2 draw with league leaders Dundalk last time out.

Derry City: The Candystripes will be without the suspended Gavin Peers.

Shamrock Rovers: Sean Boyd is Rovers only new injury concern after he picked up a hamstring injury last time out.

Kenny Shiels (Derry City): It's a big one - ourselves and Rovers are among the teams fighting for third spot," Shiels told BBC Northern Ireland.

"There seems to be an ambience about the place and for the first time in my life I'm seeing fans really enjoying themselves and having a good night out," he added. "You can see it in people's eyes and you can see it when you meet them before a game."

Stephen Bradley (Shamrock Rovers): "The players are fine and they'll be ready to go for tomorrow. It's a challenge we're really looking forward to. Obviously we want to win, winning games is what you're in it for, we just need to get back to what we're good at it like we did against Limerick and keep doing that. We just need to take our chances.

"Against Limerick it could have been four or five so we need to be ruthless. We create chances in most games and we need to take them."