Mohamed Salah savaged his former side Roma with a brilliant individual performance in a superb 5-2 Champions League semi-final first-leg victory undermined by two late goals for the visitors.

The Egypt international was the star of a performance which began as a slow-burner before turning into a blistering evisceration of Serie A's third-placed team.

However, Roma showed they are still a threat with a late rally which may yet give Jurgen Klopp's side a nervous 90 minutes at the Stadio Olimpico next week.

Klopp had predicted Salah would face a rough time against the side he left in the summer but in truth none of his former team-mates could do anything to stop him.

He scored two brilliant first-half goals - his 42nd and 43rd of an incredible season - with two also for Roberto Firmino and Sadio Mane on target as well as Liverpool made the most of their first Champions League semi-final in a decade.

The downside were goals from Edin Dzeko and Diego Perotti and a knee injury to Alex Oxlade-Chamberlain, who left the pitch on a stretcher with his head in his hands and his knee in a brace to put his World Cup in some doubt. 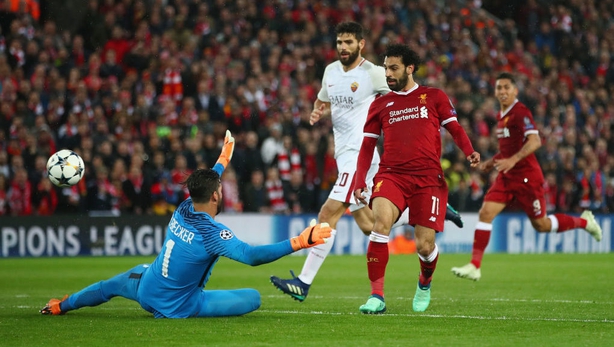 Roma almost silenced Anfield when goalkeeper Loris Karius misread the flight of former Manchester City defender Aleksandar Kolarov's driven shot but managed to get enough of a hand on it to divert it onto the crossbar.

But it was not long before the hosts had one of those passages of play which has become all too familiar to opposition teams.

They blew away City in the quarter-final with three goals in 19 first-half minutes and it is no exaggeration to suggest they could have put this tie beyond the visitors in the final 17 minutes before the interval.

Mane could have had a hat-trick, hitting two good chances over and having a sliding effort disallowed for offside, while Salah had a shot palmed away by Alisson having cut in from the right - a precursor of what was to come.

Roma did not heed the warning and a few minutes later Salah was again allowed to cut in and shape a trademark shot with his left foot.

He placed a curling shot in the only spot Alisson could not reach it, jamming it against the angle of post and crossbar on its way over the line. 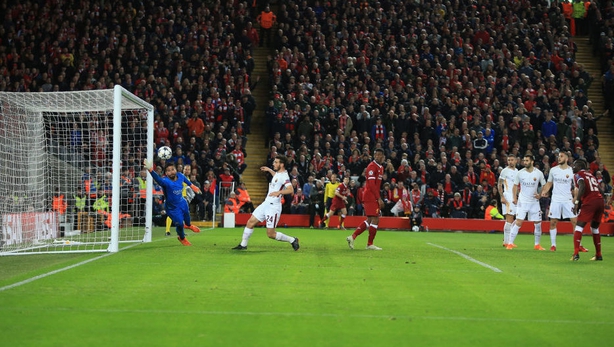 It was a goal befitting of the occasion but Salah's second was equally brilliant. The unmarked Lovren headed over as Roma threatened to buckle under the pressure before the Egypt international struck in first-half added time.

His exquisite lay-off to Firmino saw the Brazilian storm through midfield before playing a wonderfully-weighted return pass which Salah took one touch to control before dinking a shot over Alisson - a finish of which Lionel Messi would have been proud.

After the break Salah turned provider, racing onto Trent Alexander-Arnold's ball down the line to cross for Mane to turn home from close range.

When Alexander-Arnold and Salah combined again, the latter leaving Juan Jesus completely bamboozled, Firmino was the beneficiary from a couple of yards out.

Firmino's header from a corner made it 5-0 but Dzeko's neat finish and Perotti's penalty gave Roma hope of repeating their brilliant quarter-final comeback at home to Barcelona.