@mitchefi reports from Liverpool as two men charged with attempted murder after the attack on Meath man Sean Cox pic.twitter.com/fOsHPIpJB2

Merseyside Police have announced that two Italian men have been arrested for attempted murder after an assault before Liverpool's Champions League semi-final against Roma at Anfield left a 53-year-old Irish man in a critical condition.

Police said that the unnamed man had been attacked outside the ground with a belt and suffered a head injury.

It is understood he is from Co Meath and travelled to the game with his brother.

They added that the victim's family have been notified and appealed for anyone who may have witnessed the attack or had further information to contact them.

They said: "Merseyside Police can confirm that two men, aged 25 and 26 years from Rome, have been arrested on suspicion of attempted murder after a 53-year-old man was seriously injured before the Champions League semi-final game this evening.

"[They] were arrested inside the ground after officers carried out a number of proactive inquiries in a bid to identify those involved in the incident.

"Officers were called to the Albert public house at about 7.35pm following reports that a man, believed to be 53 years from Ireland, had been seriously assaulted.

"Paramedics attended at the scene and the victim, who suffered a head injury, was taken to Walton Neurological Centre where his condition is described as critical."

Liverpool FC issued a statement saying the club was "shocked and appalled".

"Our thoughts, in the first instance, are with the victim and his family at this very traumatic time. We will be offering them our full support."

UEFA condemned the attack: "UEFA is deeply shocked by the vile attack that occurred ahead of the Liverpool FC v AS Roma match and our thoughts are with the victim and his family.

"The perpetrators of this ignominious attack have no place in and around football and we trust they will be dealt with utmost severity by the authorities.

"UEFA is waiting to receive full reports before deciding on potential disciplinary charges."

Roma also condemned the "abhorrent behaviour" of a small number of their supporters.

"AS Roma condemns in the strongest possible terms the abhorrent behaviour of a small minority of travelling fans who brought shame on the club and the vast majority of Roma's well-behaved supporters at Anfield after getting involved in clashes with Liverpool supporters before last night's fixture.

"There is no place for this type of vile behavior in football and the club is now co-operating with Liverpool Football Club, UEFA and the authorities.

"The club's thoughts and prayers are with the 53-year-old Liverpool fan in hospital and his family at this time."

Clips posted to Twitter showed clashes between supporters, ambulances in attendance and suggestions that a group of Roma fans had used belts and a hammer as weapons.

Merseyside Police later announced that seven other men had been arrested for various offences, including affray, assault, possession of offensive weapons, possession of a controlled drug, criminal damage and being drunk and disorderly.

There was an increased police presence around the stadium after Manchester City's team bus had its windows smashed by bottles and cans prior to the quarter-final earlier this month.

The team arrivals passed with no repeat but there were plenty of red flares, despite specific requests from the authorities not to bring such pyrotechnics.

Liverpool fans were even pictured waving flares from the roof of a police van, though with no apparent aggravation. 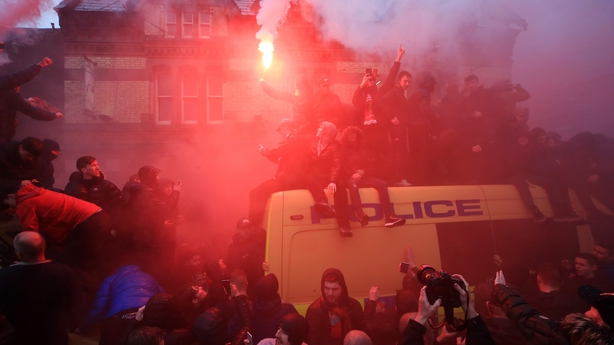 Liverpool City Council had provided police with mobile CCTV prior to the match.

Merseyside Police Chief Superintendent Dave Charnock, said: "A number of those in the crowd that had gathered to greet the Liverpool team coach were in possession of flares and work is ongoing to identify those responsible.

"The vast majority of the 52,500 fans attending the game were well behaved and went to watch a good game of football.

"However, a minority of fans from both Liverpool and Roma were involved in isolated pockets of disorder in the city centre and near to the ground."

Anyone with information or mobile phone footage of the disorder was urged to contact police.

Mr Charnock said: "We will be reviewing CCTV footage, our own body worn camera footage and working with the club to identify those involved in any of these incidents so we can put them before the courts.

"And I would appeal to anyone who has any information, or mobile phone footage, in relation to any of these incidents to contact us.

"Finally, I would like to thank the Liverpool Football Club stewards and the police officers who were out on the ground tonight for their hard work and professionalism throughout the evening."