Olivier Giroud proved the scourge of Southampton once again, setting Chelsea on course for FA Cup semi-final success and a mouth-watering clash with Manchester United.

A week after coming off the bench to net a brace and inspire a remarkable comeback win at embattled Saints in the Premier League, the 31-year-old returned to haunt Mark Hughes' side at Wembley.

Ex-Blues boss Jose Mourinho lies in wait for Antonio Conte's men on May 19, when the west Londoners can atone for last year's shock FA Cup final defeat to Arsenal - and perhaps give their manager a victorious send-off as speculation continues over his future.

Chelsea were firm favourites to win this semi-final and Willian hit the crossbar early in a one-sided first half, yet Saints managed to batten down the hatches.

But just seconds after half-time that hard work was undone as Giroud was all too easily allowed to jink through and turn home a smart individual goal.

Southampton rallied as substitute Nathan Redmond came close, but Morata headed the Blues through to a second successive FA Cup final as Saints' dreams of adding to their 1976 triumph died.

There were plenty of empty seats in the Southampton end on Sunday - although perhaps that is no surprise when you factor in the terrible football that leaves them 18th in the Premier League and facing the drop.

Such dreadful form led last year's EFL Cup finalists to be gripped by apprehension early on as Chelsea flew out of the blocks, with Eden Hazard flashing just wide before Willian struck the crossbar after cutting inside.

Maya Yoshida produced an outstanding last-ditch challenge to deny man-of-the-match Hazard after meek defending from Ryan Bertrand, with Willian then lifting a well-placed free-kick over the bar. 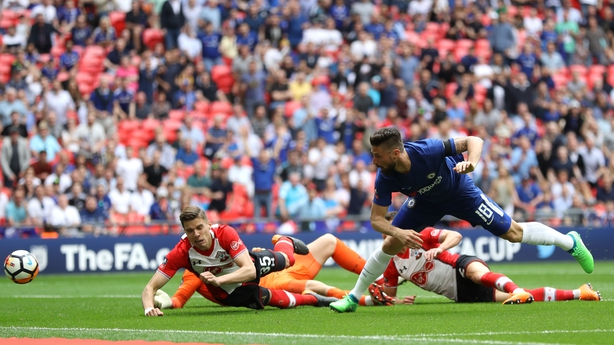 Mario Lemina's tame effort 25 minutes in was Southampton's first shot on target, but by now they had at least looked to have found a modicum of composure.

Still, Saints' midfield was being too easily bypassed and Giroud came close with an acrobatic hooked effort as half-time approached.

Chelsea surprisingly failed to get a shot on target in the first half, yet seconds into the second half they managed it. And it put them ahead.

Hazard played through Giroud and the striker showed composure sorely lacking from Saints' feeble defence. The Frenchman danced past four players and directed past Alex McCarthy in front of the Chelsea fans.

Hazard bent wide as the favourites looked to press home their advantage, although there was a belated flicker of life from Saints as Shane Long raced through on goal only to take a heavy touch beyond Willy Caballero.

The back-up Chelsea goalkeeper rode his luck when denying a fizzing attempt from Redmond and was relieved to have a foul called against Charlie Austin from the resulting corner after taking the ball over the line following a nudge.

It was Saints' best period of the game and Chelsea responded, with Hazard forcing a wonderful save out of McCarthy before Cedric's clearance hit Yoshida and flew over his own goal.

Morata came on in a bid to wrap things up and did just that within two minutes, bullying Wesley Hoedt to head home a fine cross.

It was not Saints' day and Austin's strike off the foot of the post underlined that, before Hoedt cleared off the line as Chelsea won through.