Barcelona won their fourth successive Copa del Rey with a merciless 5-0 thrashing of Sevilla as departing hero Andres Iniesta joined the usual suspects on the scoresheet.

Luis Suarez netted twice in the first half, Lionel Messi grabbed his 40th of the season and Philippe Coutinho marked his first final for the club with a successful penalty, but it was a rare strike from Iniesta which drew the broadest smiles in a one-sided romp at the Wanda Metropolitano.

The Spanish great is set to depart for China at the end of the campaign and he showed characteristic timing by popping up with a delicate effort before tearing up following an emotional tribute from the Barca faithful.

Lost somewhat amid a masterclass performance was a first piece of silverware for head coach Ernesto Valverde, who is set to complete the domestic double despite criticism.

It took Barca less than 10 minutes to mark their intentions, Messi bending a long-range free-kick straight towards the top corner only for David Soria to produce an acrobatic save.

It was to be a fleeting reprieve, though, with goalkeeper Jesper Cillesen setting up the night's opening goal with a mighty kick upfield.

With bodies tightly packed in midfield he effortlessly picked out Coutinho's run from 70 yards, the Brazilian advancing on goal before clipping across goal to leave Suarez an empty net.

Iniesta, making one last appearance in a cup final, came close to a second five minutes later but while his deflected effort easily beat the keeper it came back off the crossbar.

Sevilla's replies were brief and unsuccessful, Steven Nzonzi poking wide from the best one after meeting Jesus Navas' cross.

It was soon 2-0, Iniesta and Jordi Alba toying with Sevilla down the left and opening up space with a neat one-two.

Navas lunged in to a tackle but failed to make a good connection, leaving Alba to backheel the ball to Messi, who finished emphatically.

Sevilla had scarcely restarted when Barca picked them apart again, thwarted only by a spurious offside flag.
Sergio Escudero also had a slice of good fortune when he cynically fouled Messi on halfway, earning a yellow card despite appearing to be the last man in what would surely have become a goalscoring opportunity.

The tie was effectively put to bed in the 40th minute, Suarez exchanging passes with Messi in the number 10 pocket before finishing low past Soria.

Sevilla replaced Joaquin Correa with Sandro Ramirez at the break but in the context of the game it was a cosmetic change. 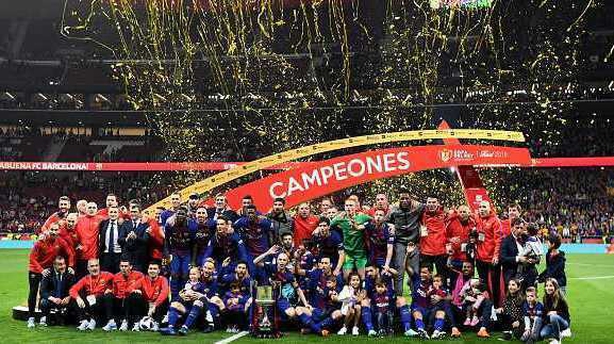 Within seven minutes it was four and Iniesta had his goal.

Suarez helped with some retrieval work, Messi played the final pass and the decorated midfielder finished beautifully - for just the second time this year.

He feigned to chip Soria, who bought the ruse wholesale, then drifted to the right and slotted home from an angle.

A fifth almost followed from the very next attack, Soria denying Samuel Umtiti from close range.
Coutinho was next to find the net, though he needed to do so twice to earn his goal.

The former Liverpool man saw an effort chalked off due to Clement Lenglet's handball seconds earlier but was allowed to take the resulting penalty to make up for his disappointment.

The highlight of the closing stages was Iniesta's exit shortly before the end, with a heartfelt tribute from all four sides of the ground.