Republic of Ireland international Matt Doherty has paid tribute to Wolves boss Nuno Espirito Santo for reinventing his game and giving him the freedom to raid the flanks as a marauding wing-back.

Doherty has played a huge role in a superb campaign for the Molineux club, who have cruised back to the Premier League thanks to a stunning campaign in the Championship.

Promotion was secured with four games to spare - they need one more point to clinch the title - and their attractive, expansive game has drawn many admirers.

Within that, Dubliner Doherty has flourished. Four goals and four assists doesn't scratch the surface of his impact this year. Along with Scottish defender Barry Douglas, Doherty's stationing high on the wing in a 3-5-2 setup has been crucial to the style Portuguese boss Nuno desires.

It's suited Wolves' longest serving outfield player down to the round.

"He made me learn a new position," Doherty told RTÉ Game On.

"I'm a full-back who loves to go forward, but wing-back is different to full-back, the way we play anyway. We play so high - at times he wants me to be the highest player on the pitch.

"When you're playing three at the back you have to really go through pre-season and not give up on it. He had it in his head to stick with it. At the start of pre-season nobody's position was safe.

"You're looking at all the players coming in thinking, 'am I the next one out the door?' Obviously he's believed in me.

"Even if I've not had a great game he's stuck with me. He gives the squad absolute belief and confidence that if they do make a mistake it's not a problem. They're good enough to either help you with that mistake or get you out of it.

"There's been times I've had a few assists from the left wing-back who's got to the byline, cut it back and I've headed it in. We can play as high as we want." 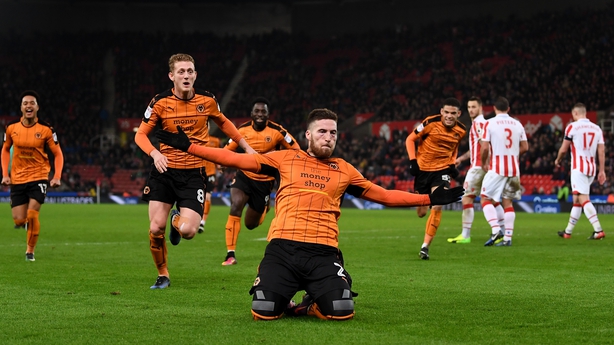 Doherty says Nuno is "the best manager" he's worked with, who, despite his passionate histrionics on the touchline, brings calm and purpose to the dressing room.

"Sometimes you might have managers or coaches who might do something for the sake of it, to fill a session, but when we do stuff we do it for a reason, and they'll tell you what it is. You have so much respect for him.

"He's relaxed. We'll come into the changing room at half-time and he won't say anything for five minutes. Then he'll come in and tell us what we need to do. He's by far the best that I've worked with."

Former Bohs man Doherty will be a Premier League player next season and he's already relishing the chance to take on the big guns.

But having made his Ireland debut in Turkey last month, he's also desperate for more appearances in green.

"It's taken longer than maybe I thought it should have," he admitted.

"It's your dream to play for your country. I want to be in every squad I possibly can be. That is a focus of mine for sure."