Matt Ritchie fired Newcastle past the 40-point mark as they came from behind to beat Arsenal and claim a fourth successive Premier League win.

The Scotland international's third goal of the season added the Gunners' scalp to the one he collected from Manchester United in February after Ayoze Perez had cancelled out Alexandre Lacazette's opener.

A 2-1 victory which ended the Europa League semi-finalists' seven-game unbeaten run in all competitions took the Magpies to 41 points and, more importantly, 13 clear of the relegation zone.

Perhaps encouraged by an Arsenal team sheet showing six changes from the side which had drawn away to CSKA Moscow on Thursday, the Magpies started at a high tempo but soon found themselves forced back into their own half with Lacazette scuffing a fifth-minute shot wide after turning neatly on the edge of the box.

Kenedy tested Arsenal goalkeeper Petr Cech with a long-range effort which skidded across the slick St James' Park turf four minutes later, but it was the Gunners who struck first with 14 minutes gone. 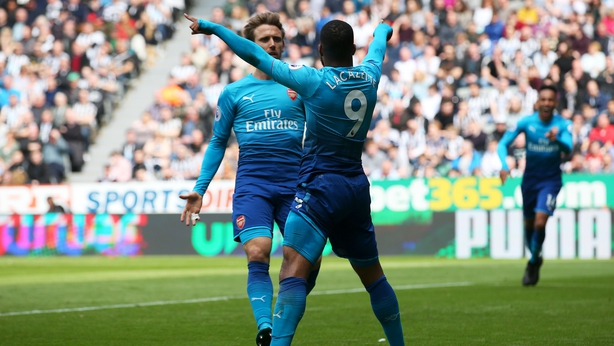 Pierre-Emerick Aubameyang, who had started wide on the left, found time and space to cross for Lacazette, who connected at full stretch with a firm effort to power the ball past Newcastle goalkeeper Martin Dubravka.

It was little more than the visitors deserved with Mohamed Elneny, Alex Iwobi and Aubameyang causing all kinds of problems for Rafael Benitez's men, whose eagerness to take the game to the visitors was leaving them a little too open.

Iwobi toe-poked a 21st-minute effort straight at Dubravka with the home side riding their luck, although had Shkodran Mustafi not got in a vital touch as Dwight Gayle controlled Jonjo Shelvey's ball over the top seven minutes later, they might have been back on level terms.

They did equalise seconds later when Gayle chased down another Shelvey long ball and laid it off to DeAndre Yedlin, whose low cross was turned expertly past Cech at his near post by Perez.

Full-back Calum Chambers passed up an opportunity to restore the Gunners' lead six minutes before the break when unlike Lacazette, he could not stretch far enough to direct Mustafi's headed cross on goal. 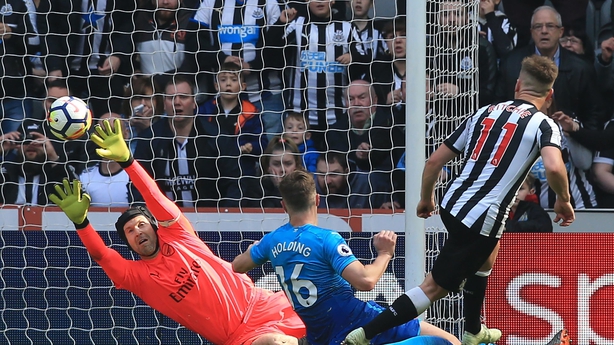 Newcastle enjoyed another escape four minutes later when Lacazette robbed Mohamed Diame and fed Joe Willock, only for the teenager to mis-kick with the goal at his mercy on his Premier League debut.

The second half began much as the first had ended, with Arsenal dominating possession, although the Magpies looked less porous in the wake of their half-time briefing.

Kenedy, who had struggled to get himself into the game before the break, belatedly started to make an impression and Benitez sent on loan signing Islam Slimani in place of Gayle as he looked for a winner.

Iwobi whistled a left-foot shot just wide with 23 minutes remaining, but Newcastle took the lead seconds later when Perez flicked Slimani's knock-down into Ritchie's path and he blasted a shot past Cech.

They might have extended their lead further with a quarter of an hour left when Kenedy's shot looped up off Mustafi and hit the crossbar, but had to withstand a late assault to prevail.