Crystal Palace and Huddersfield gave their respective Premier League survival hopes a big boost with important and dramatic victories as Southampton edged closer to the drop.

Wilfried Zaha inspired Palace to a 3-2 victory over derby rivals Brighton at Selhurst Park, the Ivory Coast winger netting twice in an entertaining first half which saw all five goals scored.

Zaha has proven to be key to Palace's bid to remain in the top flight and he put the Eagles into an early lead when he tapped in at the back post after Luka Milivojevic's shot was parried into his path.

Roy Hodgson's side were two goals to the good with just 14 minutes played as James Tomkins drilled in his third of the campaign.

That lead did not last long, with Glenn Murray scoring from point-blank range against his former club to get Brighton back into the contest.

Zaha restored the two-goal advantage with a bullet header from Milivojevic's perfect cross and, in a frenetic opening 45 minutes, Jose Izquierdo struck with a fine finish for the visitors.

The second half was less entertaining with no goals added, but the result was enough to take Palace six points clear of the bottom three. 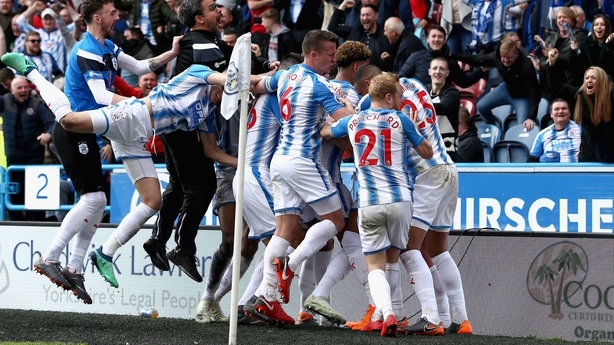 Tom Ince scored a stoppage-time winner against Watford to move Huddersfield a step closer to safety as the Terriers picked up just a third league victory in their last 16 games.

After a dull 90 minutes against an out-of-form Hornets side, Ince hit the deciding effort to take David Wagner's side seven points clear of third-bottom Southampton.

Saints had looked to be taking advantage of kicking off before their relegation rivals, leading Chelsea 2-0 before capitulating to concede three goals in eight minutes to lose 3-2.

Olivier Giroud came off the bench to inspire the comeback, scoring either side of an Eden Hazard equaliser after Dusan Tadic and Jan Bednarek had struck for Southampton.

The defeat leaves Mark Hughes without a point in his three league games in charge and the FA Cup semi-finalists are now five points from safety in 18th spot.

Swansea drop to 17th despite taking a point from Everton, with Jordan Ayew's second-half goal enough to earn the Swans a deserved share of the spoils after Kyle Naughton's unfortunate own goal had seen them fall behind. 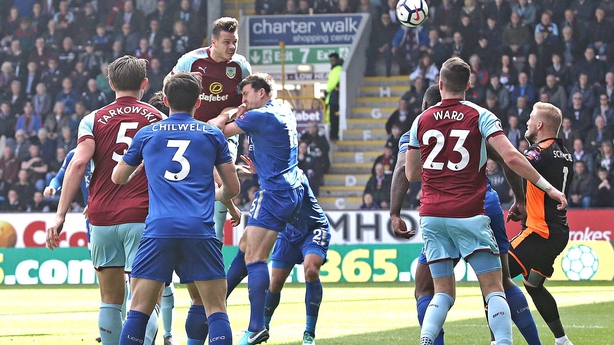 Burnley's run to the Europa League continued with a 2-1 win over Leicester, with Chris Wood scoring early on against his former club, turning home the rebound after Ashley Barnes' initial shot had been saved.

Leicester slowly brought themselves back into the contest with Nick Pope making a couple of great saves in the Burnley goal before Jamie Vardy pulled one back for the Foxes with 18 minutes remaining.

Burnley hung on to move within two points of sixth-placed Arsenal, with the Gunners travelling to Newcastle on Sunday.