Juventus' goalkeeper Gianluigi Buffon and chairman Andrea Agnelli severely criticised the performance of referee Michael Oliver after their side's exit from the tournament against Real Madrid.

After Juventus had wiped out Real's three-goal advantage from the first leg with a Mario Mandzukic double and Blaise Matuidi's second-half goal, Lucas Vazquez was bundled over in the box by Mehdi Benatia in the third minute of added time and Oliver pointed to the spot.

Buffon was sent off for protesting aggressively and Cristiano Ronaldo dispatched the penalty to send the reigning champions into the semi-finals, where they will be joined by Bayern Munich, Roma and Liverpool in Friday's draw (Live on RTÉ Player and RTÉ News Now).

The Juve captain said after the game, expected to be his last in the Champions League: "It was a tenth of a penalty.

"I know the referee saw what he saw, but it was certainly a dubious incident. Not clear-cut. And a dubious incident at the 93rd minute when we had a clear penalty denied in the first leg, you cannot award that at this point.

"The team gave its all, but a human being cannot destroy dreams like that at the end of an extraordinary comeback on a dubious situation.

"Clearly you cannot have a heart in your chest, but a bag of rubbish. On top of that, if you don't have the character to walk on a pitch like this in a stadium like this, you can sit in the stands with your wife, your kids, having your drink and eating crisps.

"You cannot ruin the dreams of a team. I could have told the referee anything at that moment, but he had to understand the degree of the disaster he was creating.

"If you can't handle the pressure and have the courage to make a decision, then you should just sit in the stands and eat your crisps." 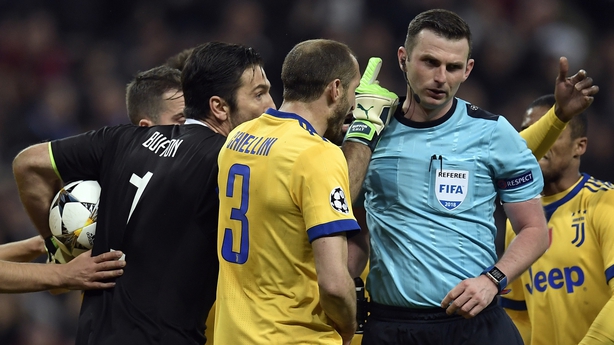 Club president Agnelli felt the decision to award the penalty was wrong and claimed Oliver should not have sent Buffon off.

"We're very proud of the game we played," he said. "The ending was evidently unhappy for us.

"Ultimately, the person who will leave the stadium with the biggest regrets is the referee Oliver. He will realise the mistake he did.

"I have pretty no much no doubt (it wasn't a penalty). Whoever has played football, it's a game of contact. The player was ready to fall.

"Buffon was in total tension, rightly so.

"He felt he had an injustice, he reacted. The reaction of the referee was double, giving a red card to Buffon then means you haven't prepared the game properly."

Late drama at the Bernebeu! A penalty for Real and Buffon sent off for protesting too vigorously #ChampionsLeague pic.twitter.com/U8gJPcBbme

The UEFA executive committee member added that it was time to use Video Assistant Referee technology in the competition.

"Given we have the technology, the referee could have put his eyes on the screen and judged it properly.

"It's been introduced in England in the FA Cup, we have it in Italy, Germany and Portugal.

"At this stage of the competition, such a mistake shouldn't happen.

"We'll try and push as much as we can to introduce the VAR in international games."

Ronaldo showed great composure to fire the ball past substitute Wojciech Szczesny - who had replaced Gianluigi Buffon after he was sent off for protesting the decision - to secure a 4-3 aggregate victory.

The protests, which lasted several minutes, made little sense to Ronaldo who waited patiently for his chance to wrap up the tie.

"I don't understand why they are protesting," he said in quotes published by Marca. "Lucas was tackled from behind and if they don't give him the penalty, it's a goal.

"The pulse increased, but I calmed down, and I knew I'd be decisive."

Ronaldo knew his side would have to fight until the final whistle against a team as good as Juventus.

Despite the 3-1 defeat on the night, the Portugal forward is grateful to be through to the last four of the competition they won in Cardiff last year.

"We have suffered, but it helps us to learn," he added. "In football, nothing is given away, you have to fight until the end.