Robbie Benson racked up an incredible 600 points in his Leaving Cert - six A1s, a perfect game.

Benson excels in maths and numbers; problems solving, equations, formulas. On the pitch is where his creative side comes out.

The silky midfielder has been at the heart of a golden age at Dundalk. Although the likes of Richie Towell, Daryl Horgan and Patrick McEleney have hogged many of the headlines in the Stephen Kenny era, Benson has chipped in with his fair share of magic too.

The stunning volley against Legia Warsaw in the Champions League qualifier at the Polish Army Stadium in August 2016; the tie-clinching goal that dumped out BATE Borisov in the round before that; a long-ranger against Zenit in the Europa League. Robbie Benson is a man for the big occasion.

It all could have been so different. Benson moved to UCD from Athlone Town so he could focus on his studies as well as play at a high level. Football was secondary in many ways at that point.

When Dundalk came calling in January 2016, his view of the game altered totally.

"When I signed I said to Stephen, 'it's my time now to be a professional footballer, and I have my education to fall back on'," Benson tells the Soccer Republic Extra podcast.

"He put it a different way to me, saying, 'I don't want you thinking like that, you need to have the mindset that this is the be all and end all for you'.

"It was enlightening at the time. It's a credit to the man that he put that in my head. I've enjoyed a good spell the last two and a half years. Hopefully it will continue until the end of the season and beyond." 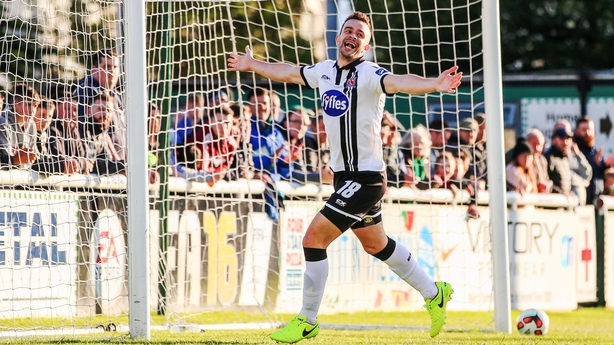 Kenny's impact at Oriel Park can be measured, not just in trophies, but by how he's improved so many players and shown that Irish clubs can take on Europe's big guns by playing courageous, technical and attractive ball.

Benson is not the only man who has thrived under his careful gaze, and the 25-year-old is quick to acknowledge it.

"I feel I'm a much better player than I was at UCD," he adds.

"It's the benefits of full-time football number one, and having a manager who gives you great belief going out on to the pitch every week and makes you feel ten-feet tall.

"He really has been fantastic for me, encouraged me to take risks where other managers might inhibit you a little bit."

Brains to burn and in the form of his life. It's all adding up for Robbie Benson.