It was a day of redemption for Declan Rice at Stamford Bridge.

Five years after being released by Chelsea, the Republic of Ireland defender helped West Ham pick up a crucial point in a spirited 1-1 draw.

His star has soared this campaign. The talented 19-year-old has become a key man in the Hammers first team and he also made his senior international debut, against Turkey last month.

His balance and poise in a side that's struggled has turned many heads. And London-born Rice, who supported the Blues as a boy, took extra satisfaction from frustrating Antonio Conte's men on Sunday.

"I’ve come back here after being released by Chelsea at 14, and five years later I’m playing for West Ham in the Premier League," he told West Ham's club website.

"Sunday was a crazy day and one which me and my family are very proud of.

"Coming to Chelsea games as a kid, joining the club at seven and being released at 14, I don't think I need to prove anything, but I felt I came back and made a statement and I was happy with my performance."

Javier Hernandez's goal - coupled with a fine performance between the sticks from Joe Hart - got West Ham out of there with a precious share of the spoils.

It moved David Moyes' men six points clear of the drop zone with six games to play. Survival is within touching distance, but Rice - who is relishing coming up against the league's best attackers - knows there's plenty of work to do yet. 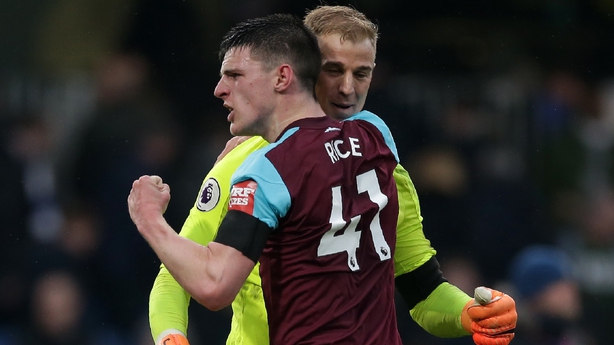 "Joe was outstanding and I thought Angelo, Cressy, Patrice, Arthur and myself were excellent as well," he added.

"On the day, we had a game plan and we stuck to it. We came out with a point and that’s massive for us going into the final six games of the season.

"It’s all about learning. I’d watched clips and obviously I know how Eden Hazard plays and how Willian plays, but you can’t really tell off a video until you face them in real life as you come up against different challenges.

"They played a few tricky one-twos and they did get in a couple of times, but in the second half we started to suss it out. It’s only going to help me build as a player, going up against these types of world class players."