Jurgen Klopp was happy to avoid a "wild derby" as Liverpool emerged from a tame clash with Everton unscathed and with their unbeaten run over their neighbours intact.

Klopp made a number of changes with the second leg of their Champions League quarter-final against Manchester City on Tuesday in mind but Everton were unable to take advantage as the sides played out a goalless draw at Goodison Park.

Liverpool quelled a buoyant start by the hosts, looking for a first win over their neighbours in 17 games, and dominated proceedings until a rousing final 15 minutes from the hosts.

Klopp said: "I think it's a fair result. We were better over most of the game and Everton had in the last few minutes a few very exciting moments in our box. Until then we controlled the game, we played the game we wanted to play.

"We were not here to play a wild derby, that would not make sense. It was quite difficult for Everton to get the game they wanted, challenges and stuff like that. It was a good performance, it was not brilliant, but maybe the most mature performance since I'm here." 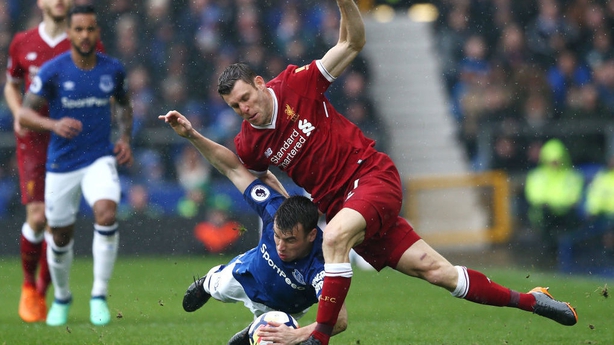 Klopp changed his full-backs and left out Roberto Firmino and top scorer Mohamed Salah, who was rested completely after picking up a groin injury in the 3-0 win over City on Wednesday.

Klopp had maintained the Egyptian had not been ruled out but said: "We didn't even think about him. Why should I?" He is, though, optimistic about Salah's availability for Tuesday. "That's what everyone thinks but at the end we will see," said the German.

Everton boss Sam Allardyce was left frustrated by his side's failure to capitalise on their late chances, with Cenk Tosun and Dominic Calvert-Lewin both missing the target.

Asked if he was satisfied with a point, Allardyce said: "Not in the end, no. We finished the game extremely on the front foot and put them under a lot of pressure, created the opportunities to win the game after some fantastic defensive work.

"The second one is the biggest miss of the day and probably the biggest chance of the day for both sides. Dominic unfortunately for him as a young boy couldn't quite make it. That would have made us all very, very happy indeed."

📝 | "Seamus Coleman and Dominic Calvert-Lewin both came close to settling the contest in the Blues’ favour during a grandstand finale..."

What did you make of it?

Everton took control after Allardyce made two changes around the hour mark, bringing off Wayne Rooney and Yannick Bolasie and sending on Idrissa Gana Gueye and Calvert-Lewin.

Rooney appeared to react angrily to the decision, but that will not put him in Allardyce's bad books.

The Toffees boss said: "Our passing sometimes got a bit woeful and it is why we made the changes today. I do think the three substitutions - which is my responsibility no matter how disappointed anybody is when they get substituted - made a difference.

"(Rooney) can come and say to me whatever he likes in the office, that's not a problem if he's disappointed, but it's done in the four walls between me and him.

"I would be disappointed (if I was him) because he's an Evertonian through and through and he's been brought off in the derby. I wouldn't expect him to smile and laugh and say, 'all right gaffer well done'. I would expect a reaction from him because that's how much he cares and that's fine by me."