By Declan Whooley at Tallaght Stadium

Substitute Amber Barrett was the match winner as the Republic of Ireland’s 2019 Women’s World Cup hopes remain on track a following a 2-1 victory over battling Slovakia at the Tallaght Stadium.

After collecting seven points from their three previous outings in to sit joint-top with the Netherlands, Colin Bell’s side were confident of collecting three points against the side bottom of Group 3, but had to rely on the substitute’s thumping strike five minutes from time to secure victory in front of 3,521 spectators.

The home side dominated possession in the opening half without testing the Slovakia goalkeeper, but finally made the breakthrough in the 69th minute with a well-taken goal by Leanne Kiernan.

That lead lasted just three minutes following an own goal from goalkeeper Marie Hourihan, but the home side showed plenty of grit and resilience to fight back and claim a deserved victory.

The result moves Ireland on to 10 points ahead of the visit of a highly-fancied Dutch side on Tuesday evening back at the same venue.

Bell made three changes in personnel from the side that claimed a highly credible draw away to the Netherlands in November.

Karen Duggan moved from her midfield role to left-back to replace the injured Harriet Scott.

American-based midfielder Megan Connolly, whose academic commitments ruled her out of the first three games, came in for the unfortunate Tyler Toland, who suffered an injury during training midweek.

The third change saw Ruesha Littlejohn replace Barrett, who made her first start for Ireland in the reverse fixture, up front. 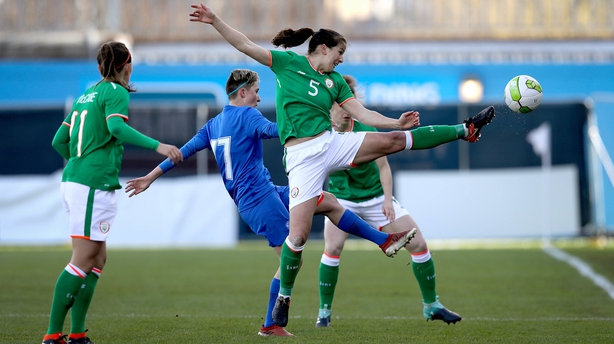 Aided by a strong breeze, Ireland quickly took a hold of the contest and started in a slightly altered 4-3-3 formation, with Kiernan the focal point up front and the outlet for many probing balls from the back.

It was a special occasion for local girl Katie McCabe who led out her country for the first time and she had the first sniff on goal in seventh minute, though it was easily collected by Slovakia goalkeeper Maria Korenciova.

Moments later the industrious Denise O’Sullivan won the ball high up the pitch but her threaded ball through was just too close to the keeper for Kieran to pounce.

It was all one-way traffic but with little end product from an Irish perspective.

Slovakia captain Dominika Skorvankova, who previously played under Bell during his time in charge of German club SC Sand, carried their main attacking threat, but was often isolated in possession in a deep-lying forward role and cut a frustrated figure.

In the 25th minute McCabe threw herself at a Sophie Perry cross, but couldn’t manage to keep the header down and it sailed over the crossbar.

The pattern of intricate passing, clever movement but a lack of cutting edge continued throughout the half and the closest the home side came in the opening half was six minutes short of the interval.

McCabe was involved again as she pounced on a dreadful kickout, but her attempted lob was neither on target or close enough to the onrushing Kieran, but had the goalkeeper rushing to her back post.

While Marie Hourihan was never in danger of conceding her first goal of the qualifying campaign, Bell would have been disappointed that his charges couldn’t create clear cut openings in the opening 45 minutes.

With the breeze at their backs, the Slovaks carried more of a threat after the break as both sides probed for an opening. Kiernan grew in influence up front, and McCabe had a 53rd minute penalty appeal waved away by referee Simona Ghisletta after she went to ground in the box.

Eight minutes later a surging run down the left flank by Kiernan had Slovakia in trouble, but her pull back, intended for McCabe, was cleared.

The visitors were now a greater threat and Skorvankova had their first shot on target shortly after the hour mark, though her rasping shot was straight at Hourihan. 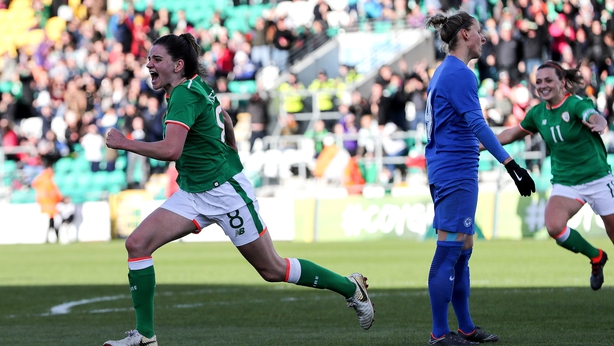 In the 69th minute Ireland finally found a way through. Livewire Kiernan raced on to Hourihan’s perfectly weighted ball and she showed a clean set of heels and no little composure to hold off the defender and fire past Korenciova.

The lead would prove short-lived however as three minutes later and Slovakia were back on level terms. There appeared to be little danger as a soft cross from Jana Vojtekova dropped in front of Hourihan, but with the evening sun in her eyes, she allowed the ball to drop and it bounced off her leg and into the net.

Ireland recovered to create further openings. Kiernan had a great chance to restore the lead but blazed over the bar, while there were moments of danger in the box where the Slovaks eventually managed to clear.

Substitute Klaudia Fabova went close with five minutes remaining when her effort landed on the Irish goal just minutes after her introduction, but there was one final twist in the tale.

Player of the match Duggan measured a precise pass from midfield, lifting it between the two central defenders where Barrett exploited the space. The Peamount United striker nodded down and let the ball bounce before unleashing a thunderous shot into the bottom right corner that left the goalkeeper with no chance.

The first part of the international double header was expected to be a more straight forward task, but the three points is all that will concern Bell and his charges ahead of Tuesday’s clash with the Dutch.