A late, late Shaun Donnellan effort was enough to hand Ireland a dramatic victory over Azerbaijan in their Under-21 Euro 2019 qualifier at Tallaght Stadium.

Noel King’s side enjoyed the lion’s share of possession but were unable to break the deadlock throughout the 90 minutes, before the Yeovil Town defender grabbed an injury time winner.

The win puts Ireland in second place in the group in their quest to reach next year’s championships in Italy.

All eyes were on Declan Rice in the Ireland midfield as the West Ham man returned to the Under-21s following a most memorable week away in Turkey with the senior side.

Rice started his first senior international in the 1-0 defeat in Turkey playing in the centre of defence, but was back in midfield for this vital qualifier, playing alongside club-mate and Under-21 captain Josh Cullen.

Noel King sent his side out in a traditional 4-4-2 formation with QPR’s Ryan Manning sitting in front of the midfield two and behind striker Reece Grego-Cox.

Ireland were slow to break down the well-organised Azerbaijan outfit, who kept numbers behind the ball, with Derry City’s Ronan Curtis looking most lively attacking at pace down the left flank.

It took Ireland 22 minutes to exert any sort of pressure on the visitors and it came from a set-piece as a long hopeful ball was pumped into the box.

The keeper travelled to collect but ended up flapping and dropping into the path of Curtis.

The left-sided midfielder smashed it across the goal, where Ryan Sweeney stuck out a leg but was unable to turn it home with lots of bodies behind the ball protecting the empty goal. 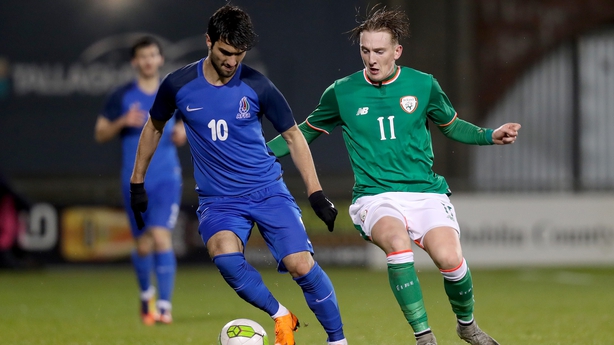 Confidence grew in green as the half progressed and Curtis again looked to create as he skipped past four or five blue shirts, but inevitably ran into the proverbial brick wall as the visitors cleared the danger.

On the stroke of half-time, Manning worked the keeper with a well-hit shot from distance.

The ball appeared to be heading for the corner of the net but the keeper got down well to save. Grego-Cox tried to turn the rebound home from a tight angle but couldn’t convert.

An re-energised Ireland came out for the second half and should have had a penalty in the 55th minute as Jake Mulraney appeared to be chopped down in the box, but the official waved it away.

The introduction of Olamide Shodipo gave the Irish attack another welcome burst of energy and King’s side almost broke the deadlock, twice, as Manning had a fine free plucked out of the top corner, before Shaun Donnellan’s header was cleared off the line from the resulting corner.

The home side maintained the pressure and again came close in the 70th minute as Sweeney’s goal bound header was intercepted by the Azerbaijan captain.

Manning was dictating play in the opposing half but Ireland were unable to unlock the stubborn last line in what was slowly becoming a feisty affair.

Man of the moment Rice had a chance to win it in the 79th minute but his curling effort from 25 yards just flew past the wrong side of the crossbar.

For all Ireland’s endeavours it was Azerbaijan who almost won it three minutes from time as substitute Ilkin Muradov let fly from 25 yards. The well-struck effort moved in the air before crashing off the bar and over.

Five minutes of injury time were added, yet Ireland still could not find a winner until the 99th minute when Donnellan was on hand to guide the ball over the line from close range. 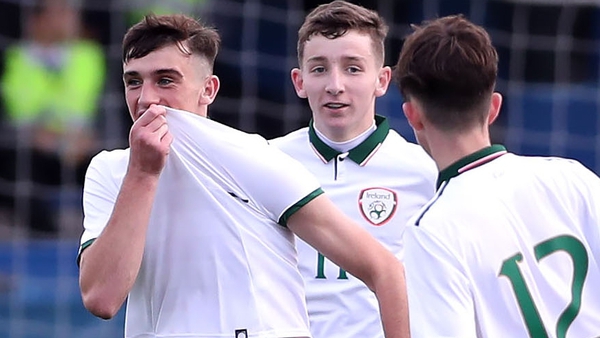