Gerry Peyton played 33 times for Ireland. The former Fulham goalkeeper held the number one jersey throughout the Eoin Hand era during the first half of the 1980s.

The Birmingham-born keeper was part of Ireland’s Euro 88 squad, as well as gaining a place on the plane to the 1990 World Cup.

But by then, Peyton was playing a supporting role on the international front, having been usurped by Packie Bonner, who played every game at the aforementioned tournaments.

It was no coincidence that Peyton's demotion to the role of understudy coincided with the arrival of Jack Charlton in 1986.

For Peyton didn’t care much for kicking the ball high and long up the pitch. The keeper’s trademark throw-out to the always available Dave Langan or Ashley Grimes allowed Ireland to maintain possession and build from the back.

Peyton is now into his 14th season as goalkeeping coach at Arsenal, and he might have raised a wry smile had he been watching his old international side as they turned the clock back in Turkey on Friday night. 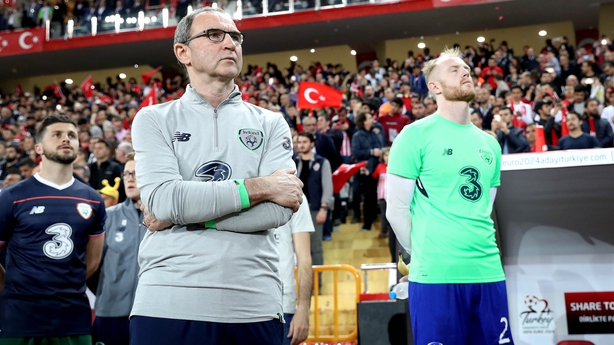 The latest chapter in the Martin O’Neill era began in typically non-stimulating style in Antalya, as he watched his side lose 1-0 to Turkey.

It was Ireland’s first outing since the humiliating 5-1 defeat to Denmark last November, and O’Neill travelled with a new-look squad for a five-day camp at the Mediterranean seaside resort, which culminated in the 1-0 defeat at the Antalya Stadyumu.

O’Neill has had more than four months to ponder his starting approach as he sets off on the road to Euro 2020, which, even with the Stoke City distraction, is a long time to wait to right the wrongs of that terrible night at Lansdowne Road.

With no competitive fixtures to really focus on, the Ireland manager had free reign to try something new on Friday night, and while the performance was far from fascinating, there was a lot to appreciate from the Irish outing.

Declan Rice’s debut and overall performance has gained many column inches, and rightly so, following such a composed debut in both defence and midfield.

But while the West Ham youngster’s first showing in an Ireland jersey was pin-pointed as the real bright spark – and many would say only bright spark – from the away fixture, there were aspects of the manager’s approach that do merit some amount of appreciation.

There was more than a sharp intake of breath ahead of the game with the realisation that the Derry man was again opting to trial a defensive three in his starting XI.

The last such experiment went horribly wrong in June of last year as Ireland’s end of season escapade turned into a charade of sorts at the MetLife Stadium in New Jersey, losing 3-1 to Mexico.

But the Ireland manager went for it again on Friday night with the ever-reliable Shane Duffy sitting in between Kevin Long on his right and young Rice on the left side of the trio. 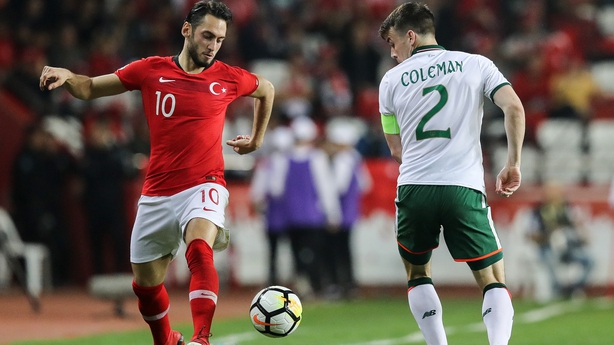 Seamus Coleman and James McClean filled in at wing-backs on either flank, and while those two particular performances failed to ignite, the three-man partnership worked quite well.

For the Irish back three were anxious to play the ball out of defence at every opportunity.

Rice and Long always showed for Colin Doyle on either side of the box, resulting in such tactics that were made virtually extinct from the Irish international set-up since Big Jack came in and afforded Packie Bonner no such liberties in the number one jersey.

Ireland played the ball out from the back on numerous occasions in the opening 45 minutes, which allowed the midfield unit of Conor Hourihane, Jeff Hendrick and Alan Browne to drop in and pick up the ball in an effort to keep possession.

An inability to hold onto the ball has been one of the biggest and most consistent criticisms of the O’Neill era and maybe now O’Neill realises that he cannot count on team spirit alone to win him games and qualify for tournaments.

At one stage, late in the first half, Ireland knocked the ball around at pace and with genuine ease as they strung 20 consecutive passes together.

What’s rare is wonderful. And while that particular passage of play did not bear fruit, the players proved that they can play that way, once given the green light from the ever-cautious manager.

There might be method to the manager’s madness, however, as this playing out from the back did also invite the home side to push on a bit, which might explain Ireland’s tendency to send several long, hopeful balls in the direction of the energy-filled attacking duo of Sean Maguire and Scott Hogan. 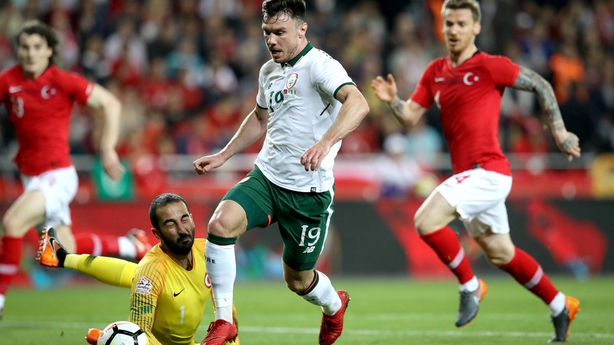 Hogan’s first-half chance was Ireland’s best of the match, and came from that midfield unit as Hendrick found himself in space with the time and confidence to guide a sublime ball into the path of the motoring Hogan.

Some might argue that O’Neill’s deployment of an extra man in defence is just another line of defence around his traditional ring of steel mentality.

And that was in evidence during those opening 51 minutes as both Coleman and McClean appeared to be playing in a traditional full-back position with neither player having any real effect in the opposing half of the pitch.

McClean’s defensive capabilities were certainly exposed, playing in that position, and Friday night’s performance would indicate that the West Brom man is not suited to such a role.

It was no coincidence that the former Derry City man only started to influence matters going forward after Daryl Horgan came on and pushed McClean further up the pitch.

And there was a certain irony about the way that the second-half transpired as Ireland were finally breached, by a set-piece, while O’Neill’s new formation only started to look effective when his side were chasing the game.

Matt Doherty was barely on the pitch when the Wolves man, on in place of captain Seamus Coleman, was racing up the right flank, as Ireland went in search of an equaliser.

Everton defender Coleman, who was returning to international duty for the first time since breaking his leg in March of last year, failed to work the flank throughout and, likewise with McClean, that must go down as a failure in the manager’s system and instructions. 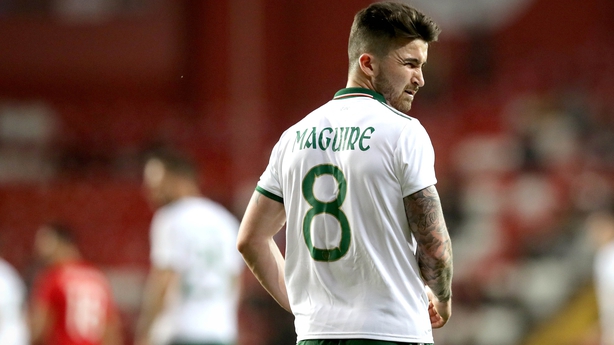 But there is certainly something to bring to France in May as Ireland have the luxury of two more international friendlies before their next competitive outing in September.

If the manager is keen on progressing this possession-based approach to the game, a lot of work will need to be put in on the training ground, something which is not any easy task in the international set-up.

But one thing that can change is the mentality and approach to the games.

Ireland’s best football during the O’Neill era, with the exception of the games against Sweden and Italy at Euro 2016, has been played when his team are chasing the game, and the players are actively encouraged to push on and take risks.

The manager has perhaps stumbled onto a formation that allows his side to attack through midfield and down either flank, while keeping two players high up the pitch as well as keeping a strong defensive option.

And while the new additions to the squad have certainly offered the manager a better arsenal to 'go to war' in the upcoming campaign, O’Neill needs to lead from the front in order to get the most out of his new-look system.